Weinstein May Be a Monster, but the Lawyers Who Enabled Him are the Real Villans 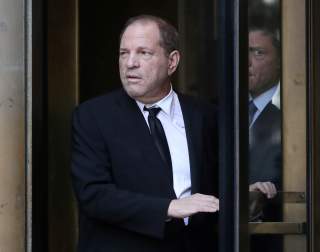 In the greater arc of the #MeToo movement, lawyers have lurked in the shadows, unnamed scribes formalizing agreements meant to stay secret.

But in “She Said,” the behind-the-scenes story of how Jodi Kantor and Megan Twohey brought down Harvey Weinstein, the lawyers finally come into view. And it’s not a pretty picture.

As a professor and employment lawyer who has followed the #MeToo movement since Kantor and Twohey’s award-winning expose in 2017, I expected their book to relay the stories of the women who publicly accused Weinstein. Of course, there’s plenty of that.

What I didn’t expect – but perhaps should have – was how central lawyers would be to their story.

The book portrays Weinstein as a monster.

He is a predator who traps female employees and actresses in an impossible maze where every path ends in unwanted touching, indecent exposure or assault. He is a beast who punches his brother in the face at the office as other executives watch impassively. He is a bully, looming over Kantor in the lobby of the Times building. He tells her he didn’t do “the terrible things that women were accusing him of.” Then he added, “I’m worse.”

Weinstein is unrepentant and irredeemable, which in a way limits his agency over his actions. Once a monster, always a monster.

The true condemnation in Kantor and Twohey’s book – if you can call it that, since they tell the story in the third person with some journalistic reserve – is leveled at the lawyers complicit in the cover-up. For they chose to help Weinstein instead of the women he victimized.

There is Lisa Bloom, whom the book describes as “a celebrity feminist lawyer and the daughter of famed women’s rights attorney Gloria Allred.”

Bloom foolishly thinks she can lecture Weinstein into changing his ways. Instead, the book suggests that Weinstein has the upper hand, by cutting a deal to produce a miniseries based on her book, “Suspicion Nation.”

There is Weinstein’s longtime lawyer, David Boies, who was also entangled in business dealings with Weinstein. In 2002, Boies persuaded the New Yorker to scrap an article on Weinstein claiming the “women were lying in order to milk Weinstein for money.”

Then in 2017, Boies negotiated a secret deal with an Israeli investigation firm to “stop publication” of the Times story, in exchange for a US$300,000 bonus from Weinstein. However, Boies was also representing the Times in unrelated litigation, which promptly fired him when it learned of the conflict of interest.

And there is the hapless Lanny Davis, a lawyer turned crisis counselor. Davis prodded the journalists for information on their investigation, claiming it would help him “answer your questions and make sure they’re true.”

He was also an apologist for Weinstein, explaining that “powerful men of an older generation were changing their understanding of the meaning of the word consensual.” But Davis would inadvertently provide a key piece of information to the journalists, admitting that Weinstein had entered into “eight to 12” legal settlements.

Kantor and Twohey do not spare plaintiffs’ lawyers from scrutiny either.

Most notably, they reference the secret settlements Gloria Allred and her firm negotiated in explosive cases over the years – including one involving Weinstein. The book also implicates the many other unnamed lawyers who pushed their clients to accept secret settlements in the $100,000 range.

While standing in his driveway, the unknowing husband of one Weinstein victim points to the modest house behind him, insisting, “Do I look like a man whose wife got a settlement?”

The Morality of Lawyers

The only lawyer spared from judgment is The New York Times’ own in-house lawyer, David McCraw.

He responds to a blustery cease-and-desist letter from Weinstein with the assurance that “any article we do will meet our customary standards for accuracy and fairness.” Kantor and Twohey’s article runs the next day.

The book raises important questions about the extent to which the legal profession was complicit in concealing conduct like Weinstein’s over the years. While the lawyers in the book are caricatures, their more banal counterparts – lawyers like me who once routinely inserted confidentiality provisions into settlement agreements – are no less complicit.

Unlike journalistic ethics, which is steeped in tradition and reinvigorated when applied, legal ethics rules are codified in state law. As a result, lawyers need not agree upon, or even examine, the moral component of what they do.

A lawyer’s general duty of loyalty as applied to a bad client like Weinstein can be fulfilled in a variety of ways. You might use the David Boies strategy of plowing forward despite the facts, or try Lanny Davis’ approach of limiting the fallout. Lisa Bloom’s attempts to lecture her client can sometimes work, though it becomes a form of rationalization once it’s clear your client won’t change. The last option is to just fire your client, which other Weinstein lawyers might very well have done.

Lost in the reflexive shuffle of legal moves is the broader question that Kantor and Twohey ask again and again: why “no one had ever stopped this man.” In the end it would be journalists, not lawyers, who would hold him to account.