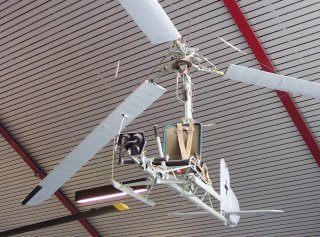 During the Second World War, submarines were limited in what they could see, often only able to see as far as their periscopes would allow them — merely several miles in any direction. But with this weird device, they increased their line of sight.

The ocean can be a difficult companion. If you were a submarine captain during World War Two, your job was quite hard.

Long days of utter boredom would be punctuated by moments of sheer adrenaline — if you could find something to shoot torpedos at. Although so-called U-Boat wolf packs would camp out in known sea lanes and hunt passing Allied shipping, the days were long.

Before the widespread use of radar at sea to detect ships, virtually of the boat hunting was done visually. Being low in the water, U-Boats (and really all submarines) could not see very far in any direction, limited to about 5 miles if sightings were taken on the conning tower, the highest part of a submarine.

Naval designers turned to the air to find new quarry. Using a lightweight, ultra-compact rotary kite — essentially an unpowered helicopter — a lookout would be towed behind the U-Boat on a rope, scanning the horizon for targets.

Extended along behind the submarine, tethered to the conning tower, the lookout could see much farther, around 25 miles.

The rotor kite could be conveniently folded up, and was normally stowed on the outside of the conning tower in watertight containers. One of the tanks contained the three rotor blades and the hub, the other the hull structure, steering system and tail unit.

Although a tricky and potentially dangerous maneuver, unpacking the rotor kite took around twenty minutes.

This video, though grainy, gives an idea of how the contraption worked. Once deployed on deck, the submarine would cruise into the wind at full speed. Given sufficient speed, the wind would catch the rotor kite’s rotor, causing it to spin and generating lift, gently lifting a lookout into the air.

In case of emergency, the rotor kite could be cut away at no danger to the lookout. The rotor would simply slow and float down, gently landing in the ocean with the assistance of a parachute system.

Still, operating one could be hazardous. Because of the deployment time needed to launch one, and the fact that a rotor kite could give away the U-Boat’s position, they were mostly used in the Indian Ocean.

The German rotor kites were not exactly a success, the process of unpacking, assembling, spooling out, towing back in, and restoring a rotor kite took time and posed a risk to the operator. Allied convoy escorts made U-Boats vulnerable to attack. Not exactly a crow’s nest, but a type of lookout nonetheless.