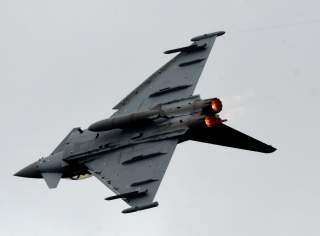 On Sep. 17, 2017 Qatar and U.K. defense ministers signed the Letter of Intent (LOI) over Qatar’s purchase of 24 Eurofighter Typhoons.

Qatar was supposed to make the first payment for its order of 24 Eurofighter Typhoon aircraft in order to cement the deal but the Gulf state has failed to do so.

News report from The National says Qatar is trying to raise money from the capital markets to fund the purchase and this has delayed the process and caught the British off guard.

“Initially the payment was expected around now but (has now been pushed) back to the third quarter on financial records, perhaps late August, so the deal can go through,” a source close to the deal said. “We don’t know why they need to do this (get the loan), it is their internal process that we are not party to, but we are still confident of payment and expect the deal to go through.”

In December 2018 BAE said the deal was subject to “financial conditions and receipt by the company of first payment, which are expected to be fulfilled no later than mid-2018”.

“The Typhoons will boost Qatar’s mission to tackle the challenges we both share in the Middle East,” a British government spokesman said. “This is an ongoing commercial matter between BAE Systems and the Qatari government, who continue to progress this deal, which will support thousands of jobs and inject billions into our economy.”

In light of Qatar’s historic wealth, it was not expected at the time of signing that a large loan would be necessary to fund the first installments. Since the diplomatic boycott imposed on Qatar by the Arab Quartet, including Saudi Arabia and the UAE, last year, Doha has engaged in a series of unprecedented debt market issuance exercises.

“GDP growth is estimated to have remained flat at 2.2 per cent in 2017, in part reflecting the effects of the ongoing rift with its neighbours,” the World Bank said in April.

On Sep. 17, 2017 Qatar and U.K. defense ministers signed the Letter of Intent (LOI) over Qatar’s purchase of 24 Eurofighter Typhoons.

Qatar’s LOI for Eurofighters came three months after the Gulf state signed a deal with the U.S. for the procurement of 36 Boeing F-15QA (Qatar Advanced)-variant Eagles, which came two years after it ordered 24 Dassault Rafales from France. The Qatar Emiri Air Force (QEAF) has a requirement for 72 new combat aircraft to replace its aging fleet of 12 Dassault Mirage 2000-5 fighters. If the Typhoon and Eagle orders are fulfilled in full, the QEAF will field a fighter force of 84 platforms across three different types.

For some years, Qatar has been building up its combat aviation capabilities with the procurement of the latest platforms and technologies. The increase in the QEAF’s frontline fighter force from the current 12 aircraft to upwards of 84, in particular, will represent a massive enhancement in its capacity and capability.