Welcome to Chaos: Is There Any Solution in Sight for Hong Kong? 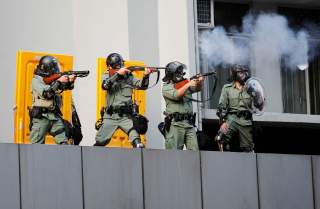 Key point: A difficult balance may be necessary to avoid escalation and bloodshed.

Hong Kong’s summer has taken another turn for the worse. While the vast majority of protestors have been peaceful, violence and vandalism have now become the norm — and for some the goal. Clashes with the police have continually escalated. Amid such chaos, is there a way forward for Hong Kong?

The movement has ventured far beyond the original catalyst, the government’s extradition bill, with increasingly radical dynamics abetted by inept government responses. Social media has shaped narratives which allow groups (more than individuals) to create their own reality. De-escalation is sorely needed, but elusive.

Politically speaking, the protestors have achieved a lot. The government has announced the formal withdrawal of the extradition bill itself, though it took several attempts to convince people that the bill was in fact ‘dead’. The passage of the controversial national anthem law continues to be postponed and the long-discussed national security legislation (required under Article 23 of Hong Kong’s Basic Law) will now appear even lower down the agenda than it already was.

Indeed, Hong Kong’s government is weaker than it has ever been. The balance of power has shifted away from the government, exacerbated by the weak performance of Hong Kong’s political institutions. The anti-mask regulation, introduced on 4 October, has not yet helped authorities gain some control over the protests.

A power vacuum brings risks beyond those of street politics. Like it or not, the weakness of Hong Kong’s political institutions could mean that Beijing increasingly seeks to guide socio-economic change in Hong Kong in ways not previously envisaged. Its recent rhetorical intervention targeting property developers is an example.

Unrest looks set to continue. Radical protestors have dug in for prolonged urban warfare against the government, police and even Hong Kong’s mass transit rail system, using increasingly violent measures. Dialogue and compromise are not on their agenda, only the pursuit of goals and ambiguous slogans which are unlikely to be realised under Hong Kong’s current political framework. The government continues to resist the demand which attracts most popular support — for an independent commission of inquiry — without explaining convincingly why it opposes the idea.

The persistence and scale of the protests also reflect deep dislocations in Hong Kong, ranging from a fundamental dislike of Beijing to localist or independence sentiment, protectionist identity politics and socio-economic problems. These go beyond questions about the constitutional arrangement of ‘one country, two systems’. Given the depth of the wounds and hatred, there is little chance that Hong Kong’s problems will be solved. There is no consensus on what a political solution looks like.

Nonetheless, can things to some extent managed?

Chief Executive Carrie Lam’s annual policy address, delivered on 16 October, was an opportunity to set out a way forward. Lam focused on housing, land supply, livelihood issues and economic development, announcing a raft of measures and the goal that every family would be able to have ‘their own home in Hong Kong’.

This could contribute positively to the longer-term challenges facing the city, though housing in particular will remain a running sore. More could probably be done in the short term with Hong Kong’s fiscal surplus and reserves, targeting sectors most affected by the turmoil and finding ways of ensuring that money reaches the grassroots.

Lam ended up delivering her address by video link, after disruption of the legislative sitting by opposition lawmakers. This shows the limited appetite for dialogue across the community, following a set-piece dialogue on 26 September (which incidentally highlighted the differences between Hong Kong and the rest of China).

Before her address, Lam rejected calls for immediate resumption of political reform, even though this is again moving up the popular agenda (and seen by some as a panacea). The problem remains that changes require a broad consensus. Progress on universal suffrage needs agreement by the central government, the Hong Kong Special Administrative Region government and two-thirds of the legislature. This is where things came unstuck in 2014, when it was opposition legislators, not the government, that vetoed change. Prospects for consensus look even bleaker now.

In spite of the challenges facing Hong Kong, the cacophonous politics of this summer have highlighted the distinctive nature of Hong Kong’s system, and the ability of its citizens to express their views locally and internationally. The city’s wider value for China and international business needs to be retained, even as the US Congress seems determined to make its distinctiveness more difficult to maintain with the passage of a new Hong Kong Act, the most likely impact of which will be an erosion of confidence in Hong Kong and a reduction in its actual autonomy.

Foreign governments have been heavily lobbied to ‘stand with Hong Kong’. But to do this effectively requires understanding the full range of views across the community — not just those who lobby in Washington, London or Canberra. It also means giving some support to the Hong Kong government and encouraging it to find the right balance between the interests in Hong Kong and those in Beijing, difficult though this may be politically.

Most important of all, this wave of violence must come to an end. Unless this happens, Hong Kong’s society may never recover from the current crisis.

Tim Summers is a Senior Consulting Fellow of the Asia-Pacific Programme at Chatham House and Lecturer at the Centre for China Studies, The Chinese University of Hong Kong (CUHK). He is the author of ‘China’s Hong Kong: the politics of a global city‘ (Agenda Publishing, 2019).