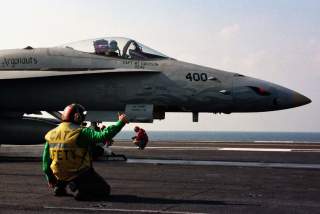 Key point: If America wants to maintain its deterrence, it needs good war games and training. That means revamping how it readies its F-18 pilots.

David Axe serves as Defense Editor of the National Interest. He is the author of the graphic novels  War Fix, War Is Boring and Machete Squad. This first appeared in November 2019 and is being reposted due to reader interest.