What’s Next in the U.S. Security Relationship with the Iraqi Kurds? 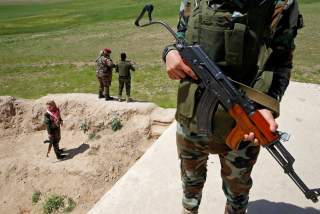 The United States has reached an inflection point in Iraq. U.S. personnel that are deployed to the country to support local Iraqi partner forces against the Islamic State of Iraq and al-Sham (ISIS) are being targeted with rocket attacks by Iranian-backed, Iraqi proxy groups. These attacks not only threaten America’s counter-ISIS mission in Iraq but also forced the closure of the American consulate in the southern city of Basra last year. Additionally, they could lead the State Department to draw down its presence in one of the largest U.S. embassies in the world. With the future of the U.S. presence in Iraq an open question and cause for discussion, there has been far less attention paid to the Kurdistan Region of Iraq (KRI), which continues to provide a safe haven for U.S. operations in Iraq and Syria.

It is surprising that the long-running U.S. security relationship with the Kurdistan Regional Government (KRG), which controls the KRI, has not been discussed in greater detail among the American foreign policy and national security policy community at a time when the rest of Iraq is becoming increasingly inhospitable to a U.S. presence. The KRI has become an important staging ground for U.S. counterterrorism operations in the Middle East and through the close U.S. operational relationship with the Peshmerga forces loyal to the KRG, an important partner for America in a region beset by instability. Since the United States and the KRG agreed to a memorandum of understanding on security assistance in 2016, with assistance to the KRG funneled into northern Iraq to the Ministry of Peshmerga Affairs (MoPA) with the tacit approval of Baghdad, there has been a significant increase in the support that the Peshmerga have received from the United States.

The U.S.-KRG security partnership has been a steady target of American funding. There has been more than $400 million in direct security assistance provided to the KRG in the half-decade since the war against ISIS began in 2014. This U.S. funding has provided a range of support for the KRG, the MoPA, and the Peshmerga forces including for weapons systems, intelligence, reconnaissance, and logistical support, training, and the salaries paid to Peshmerga fighters. Keeping with the theme of deepening the security relationship with the KRG, which was established by the Obama administration, the Trump administration has carefully increased the security assistance provided to the KRG on behalf of the Peshmerga, with an FY2020 request of $249 million.

This increase in U.S. security assistance to the KRG and the MoPA and the Peshmerga forces has reportedly been a direct response to internal Department of Defense assessments that call for boosts in U.S. support in order to meet the operational requirements of the counter-ISIS campaign. Reports from the counter-ISIS campaign in Iraq also indicate that the elite Peshmerga counter-terror units were accompanied by U.S. units such as Delta Force and SEAL Team 6 in joint direct action against ISIS. This collaboration indicates that interoperability between the United States and Peshmerga forces have improved significantly since the war against ISIS began.

Yet, there remain challenges in the U.S.-KRG security relationship that will require careful management by Washington. Although the security forces of the KRI are supposed to be non-politicized, the majority of the various security force units are ultimately under the direct authority of the two most powerful political parties that dominate the KRG. Those parties are the Kurdistan Democratic Party (KDP-under the leadership of Masoud Barzani) and the Patriotic Union of Kurdistan (PUK-under the leadership of Kosrat Rasul Ali). Divisions within the security forces of the KRI along political party lines have existed for decades and have survived every reform effort promoted by foreign partners of the KRG to date, especially those made by the United States and its counter-ISIS coalition allies such as the United Kingdom, France, and Germany.

This continuing KDP and PUK influence over different branches of the KRG security services remains a major target of reform efforts that are supported by the United States and its coalition allies. These efforts combined with the resulting challenges to coordinating forces and the challenges of diffusing tensions between the KDP and the PUK, which reflect the decades-old tensions that occasionally flare-up. Another related and long-standing U.S. objective since 2005 has been to try to improve the coordination between the KRG and the Government of Iraq (GOI) related to security issues, which included the establishment of a trilateral U.S.-KRG-GOI process called the Combined Security Mechanism. The Combined Security Mechanism existed until 2011, which is when the U.S. military formally left Iraq in the absence of a Status of Force Agreement (SOFA) with Baghdad.

The Peshmerga are provided security assistance by the United States under the justification that it is a “local security force” that is ultimately subordinate to the Iraq Security Forces under the authority of the GOI. U.S. support for the Peshmerga that is provided under Title 10 authorities is done with the assumption of approval by the GOI, and it is under this assumption that the 2016 memorandum of understanding was signed between the U.S. and the KRG. Of course, this arrangement has limitations, such as being susceptible to breakdowns in trilateral U.S.-KRG-GOI relations, but it has also given the U.S. government a clear legal pathway to provide defense funding and in-kind support to the KRG and the Peshmerga, including for “operational sustainment” purposes (such as the reform process for the Peshmerga, paying salaries and training) and specifically earmarking some Foreign Military Financing for Iraq to purchase infantry equipment such as mechanized vehicles and artillery equipment for the Peshmerga.

Synchronizing U.S. counterterrorism goals in Iraq with the likelihood of long-term U.S. investment in the security partnership with the KRG while retaining strong coordination with Baghdad will be tricky, and will require a dedicated U.S. official based in the KRG to execute. To stabilize and potentially expand the security relationship between the U.S. and the KRG, a type of “security coordinator” position would need to be created to oversee future U.S. security assistance and reform efforts for the Peshmerga forces. A potential “U.S. Security Coordinator for Northern Iraq and the Iraqi Kurdistan Region,” would be permanently based at the U.S. consulate in Erbil, and would be responsible for overseeing American security assistance for counterterrorism and stabilization operations in northern Iraq as well as the Peshmerga to support these operations. In general, the U.S. Security Coordinator for Northern Iraq and the Iraqi Kurdistan Region (USSC-NI/KRI) would provide the U.S. government with more tailored oversights of this region of Iraq that has typically fallen off the radar for U.S. policy on Iraq.

The position could be modeled after the U.S. Security Coordinator for Israel and the Palestinian Authority, although it is to be determined whether a general (likely at the Brigadier General rank) or senior U.S. civilian official would assume the role which would provide formal and close oversight of what has become one of the key security partnerships for the United States in the Middle East.  Further, U.S.-led coalition partners have already elevated their relationship with the KRG/Peshmerga, such as the United Kingdom. The UK has a Special Defense Advisor to the Ministry of Peshmerga Affairs. Considering the larger size of U.S. support for the KRG and the Peshmerga, and the longer length of the relationship between the U.S. and Iraqi Kurds, a permanent U.S. special security coordinator posted at the U.S. consulate in Erbil would be appropriate.

There would be several overarching objectives that the USSC-NI/KRI would seek to achieve, but the primary objective would be to ensure that the significant investment of U.S. funding to the Peshmerga forces are being used in a manner that has measurable impact and furthers U.S. national security goals in Iraq. A second objective for the USSC-NI/KRI would be to provide critical guidance to the Ministry of Peshmerga Affairs in order to apply additional and formal pressure on the MoPA and the Peshmerga forces to reform, especially regarding the reorganization, depoliticization, and professionalism of the Peshmerga. And a third objective for the USSC-NI/KRI would be the creation of an accountable, capable, and affordable Peshmerga force that operates as an effective element of the Iraqi Security Forces in order to promote synchronization of effort between Erbil and Baghdad.

Northern Iraq will continue to be an area of great concern and the ongoing challenges faced by the GOI means that the effectiveness and professionalism of the Peshmerga forces will be key to addressing long-running U.S. security concerns related to Iraq. The creation of the position of the USSC-NI/KRI would provide needed senior security sector reform advise-and-assist capabilities. Plus, it would give greater influence to the KRI within U.S. policy on Iraq because there is currently an imbalance in the policy toward the GOI.  Therefore, more formal and consistent attention needs to be given to the KRI. A USSC-NI/KRI would also synchronize the KRG, MoPA, and Peshmerga security sector reform efforts with the U.S. strategy for security sector reform for the rest of Iraq while providing added resources, authority, and attention to U.S. efforts in the KRG.