What’s Planned for the B-21 Unveiling? The Air Force Just Dropped a Hint. 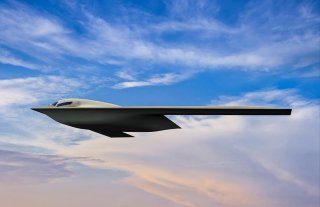 The U.S Air Force is known to be working on the new B-21 stealth bomber, meant to compete with the improving air defenses of China and Russia.

“The B-21 bomber does look like a B-2 bomber in a more general way, yet it is potentially much stealthier. The engine inlets, for instance, appear much more conformal and blended into the body of the aircraft, unlike a B-2 bomber where they protrude slightly above the wing. The exhaust on the B-21 bomber looks different from the B-2 bomber, too, as the available renderings of the B-21 bomber show virtually no exhaust release. Are there new thermal management techniques enabling different, much stealthier heat dissipation?” defense reporter Kris Osborn wrote last month for the National Interest.

“The more closely an aircraft and its exhaust mirror the surrounding temperature, the stealthier it is as thermal sensors are less likely to detect changes or differences in temperature.”

Now, a new report looks at what the public rollout of the B-21 Raider might look like.

Defense One reported this week that the Air Force leadership is planning something big for the public debut of the B-21. This follows the news, from Air Force Secretary Frank Kendall earlier in the week, that five prototype bombers are in production. Indeed, a recent Center for a New American Security (CNAS) study found that the Air Force should build as many as 164 Northrop Grumman B-21 Raider stealth bombers, in order to combat a potential war with Russia or China.

“As you might imagine, they’re big airplanes,” Air Force Chief of Staff Gen. C.Q. Brown told Defense One in the interview. “It’ll be sequenced as the five come out.”

“There will be a ceremony at some point—whether it’s for the very first one for the first flight, or a little later …. I’m sure we’ll do something special as we bring out the B-21,” Brown said in the interview, which took place at the State of Defense conference.

In the interview, Brown was asked about a photo that recently surfaced at Lockheed Martin’s Helendale facility, of a plane that conceivably be the B-21 Raider. Brown told Defense One that he hadn’t seen the photo and couldn’t comment on it.

“When considering theoretical requirements of up to 200-plus bombers to prosecute a penetrating strike mission against a great power such as Russia or China, it is better to err on the side of caution and maintain a healthy complement (24) of backup and attrition aircraft,” the authors of the CNAS report, Jerry Hendrix, CNAS director of defense studies and Air Force Lt. Col. James Price, wrote.