What Is the “Delta Defense Group” and Who Keeps Sending Secret Guns to Syria? 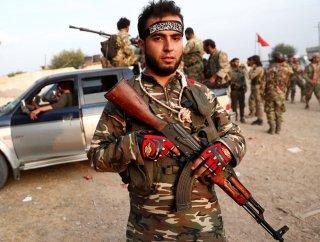 Key point: A lot of actors are interested in the Syrian civil war and which groups survive. A lot of strange arms have flooded the region and it is unclear who made them, where they are from, and what their purpose is.

The battlefields of Syria see handguns from every corner of the globe. The massive demand created by the war has led Ukrainian, Russian, Turkish, and Chinese manufacturers to pump new production handguns into the region. While the deliveries of these pistols can be overt, sometimes efforts are taken to hide the origin of these pistols.

There are two known varieties of Delta Defense Group pistols, the full-size C6 and the compact C5. Both appear to be based on modern CZ-75 derivative designs, such as those made by the Turkish Sarsilmaz, Italian Tangfolio, or Israeli IWI. All of those implement the CZ-75’s Double Action/Single Action hammer-fired action into a cheaper metal rail in polymer frame design similar to the Glock. This lowers the costs versus metal-framed CZ-75s.

As for the shooting characteristics, end-users interviewed by Silah Report said that the Delta Defense Group pistols had favorable shooting characteristics compared to Ukrainian Fort-14PP and Russian MP-446 pistols also present in the region. It’s also likely superior to the Chinese Norinco NP-20 due to the more ergonomic shape of the grip. That being said, it’s unlikely that the pistols are better than other modern pistols like Glocks, though those carry a prestige premium in the region. For the average SDF fighter or Iraqi militiaman, a Delta Defense Group pistol may be a cheap, light, reliable alternative to more expensive options on the market.

The author would like to thank AnalystMick for assistance and original reporting on Delta Defense Group pistols.