What are the Top 10 Sources of Threats to America? 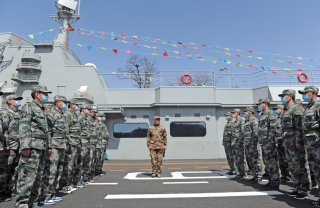 The ODNI report was first released in 2006, but the annual tradition of the IC chiefs publicly testifying before Congress dates back further. In a democratic society that generally values public accountability and civilian control of military, the IC stands out as truly clandestine. The Annual Threat Assessment and corresponding public hearings represent one of the only glimpses the public gets into the IC’s work, which had a budget of about $86 billion in FY2020. Likewise, the Threat Assessment provides an opportunity for the IC to demonstrate its value to the public. As former CIA officer David Priess recently explained, the report is important because “it forces the Intelligence Community at the highest level to rack and stack the threats.”

The Annual Threat Assessment also holds promise as an analytical resource for scholars and analysts studying U.S. national security and foreign policy. Threat perception plays an important role in many theories of international relations, but it has been difficult to measure and operationalize in academic studies. Using a text mining approach to analyzing the Annual Threat Assessment, I recently developed and published a new dataset on the Harvard Dataverse, which assigns a threat perception metric to every country on an annual basis from 2006-2021 (with an imputation for the missing 2020 report). Scholars and national security analysts can use these data in studies of conflict and statecraft.

How were the data developed?

To generate the U.S. Security Threats Dataset, I tabulate all state references, which include state names, nationalities, and capital cities, across the Threat Assessments published to date. I tabulate capital cities and nationalities, in addition to state names, because the official assessment refers to states in a few different manners. For example, “Russia,” “Russian,” and “Moscow” all essentially have the same meaning within the context of the Threat Assessment. After tabulating all state references, I generate a state’s Threat Share. The Threat Share is the number of times a state is referenced in a given year as a percent of all state references in that year.

What are the limitations?

An obvious limitation of the Threat Share metric is that it does not capture nonstate actors, such as terrorist groups, transnational threats—such as climate change and pandemics—or general themes, such as cybersecurity. Another key limitation is that the Threat Assessment is not exhaustive and necessarily focuses on the most pressing threats. Finally, although the focus of the assessment is on threats, there are occasional benign references to allies and partners. Users of these data should bear these limitations in mind.

What are the biggest sources of threat to U.S. national security?

Figure 1 captures the top ten sources of threat to U.S. national security since 2006, as measured by the average Threat Share from 2006-2021. Iran, Russia, and China decisively outpace other countries as sources of threat, while Iraq and Syria form a next level tier. Interestingly, Afghanistan, Pakistan, and North Korea are comparable in terms of Threat Share.

The composition of the top ten countries highlights a critical nuance of the dataset that is made clear in the title of this piece—the Threat Share metric captures sources of threat, not necessarily governments the U.S. IC finds threatening. To illustrate this nuance, consider India. As a critical pillar of the so-called Quad, the Government of India is not a direct threat to U.S. national security. However, the Threat Assessment frequently flags a number of potential threats involving India. For example, the 2021 Threat Assessment argues: “Interstate conflicts will also flare, ranging from border sparring, such as that between China and India, to potentially more sustained violent confrontations.” 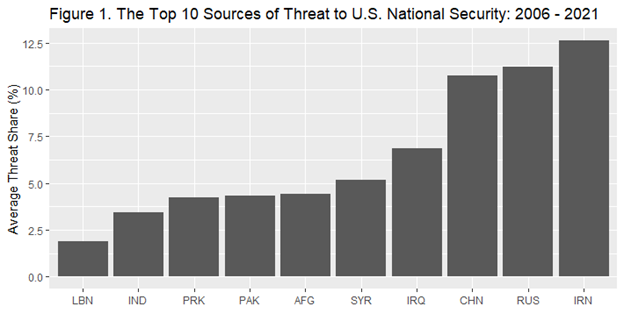 Figure 2 shows how the top sources of threat have evolved over time. Focusing on the top three sources of threat, the trends are quite different. Though steadily elevated for a number of years, China was never the top source of threat until its dramatic increase in 2019, when it overtook Russia as the top source of threat, a designation it maintains in 2021, albeit only slightly over Iran and Russia. For its part, Iran has maintained a consistently high Threat Share since 2006. Russia displays perhaps the smoothest trend of all countries, steadily increasing in importance since 2006. Overall, the U.S. Security Threats Dataset bears out what the national security establishment has argued in recent years—namely, Great Power competition is back. Nevertheless, Iran’s staying power as a major source of threat is also striking. 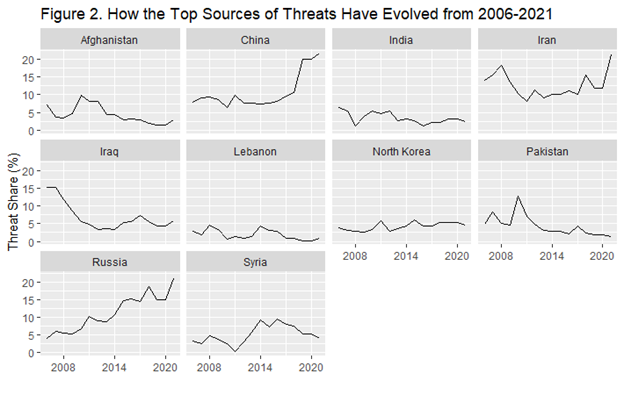