What Bee Behavior Can Tell Us About Bacteria and Microorganisms 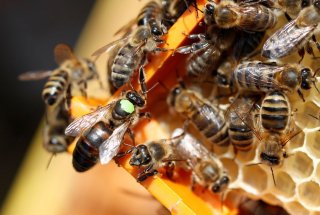 In late summer last year my doctor prescribed a monthlong course of antibiotics for an infection. Medicines like antibiotics are great at wiping out bacterial infections. The problems is that these drugs don’t differentiate between eliminating the “good” bacteria that may benefit our health and the “bad” bacteria causing infection. I was absolutely miserable and suffering from an upset stomach and lack of appetite, until I started taking probiotics. After a few weeks of probiotics that replenished my microbiome - the bacteria in your gut that break food down into nutrients - I felt like myself again.

The next week I was in my study sites in Seattle’s public parks, surrounded by native bees. I had been so miserable without a diverse microbiome; I found myself wondering about the organisms I study. My project began with a simple question: Where do insects get their microbiome?

Insect pollinators are responsible for a huge proportion of plant pollination worldwide, including an estimated third of agricultural crop pollination. Chemicals such as pesticides and fungicides harm both honey bees and wild native bees. Recent studies are revealing the potential benefits of the bee microbiome for maintaining the health of these pollinators and mitigating viruses and disease.

Where does the microbiome come from?

The microbiome is a diverse community of microscopic organisms that live in and on the human body and provide a variety of health benefits. The bacteria present in your gut have been linked to defense against and the development of gastrointestinal cancer. These microbes are critical for absorption of nutrients in infants during the months following birth. They are also essential to help breakdown food into vitamins and amino acids.

While there has been a lot of research focusing on the human microbiome, little is known about the bee microbiome.

Every year I spend the summer with thousands of native bees. I place bee-friendly nests in open meadows and restoration sites across western Washington and collect nesting tubes once they’re filled with bee offspring and pollen. I spend hours carefully opening the tubes, separating pollen into vials for storage. I often find mold covering the pollen.

I used to throw moldy samples into the freezer to be forgotten, assuming they had been lost to the elements of a wet Seattle spring. But the more evidence I found of microorganisms in the pollen from my bees, the more I began to wonder whether these organisms were helping or hurting the bees. As I sorted through the scientific research, I found myself asking questions about the relationship between microorganisms in pollen and their contribution to bee health.

Social bees, which live in a hive with a single fertile queen, such as honey bees and bumble bees, have a shared microbiome – the bees feed on a shared food source within the hive to acquire microorganisms in their gut. Social bees collect microbes like Bifidobacterium) from feeding on fermenting honey.

These organisms protect the bees from intestinal parasites, boosting their hive immunity to diseases. Honey bees also collect bacteria from the surface of flowers, where they share contact with other pollinators. The number of individual bees in social bee colonies can reach the hundreds of thousands, meaning billions of microorganisms are supporting the hive.

Solitary bees face a much different predicament. As their name implies, these bees do not share a hive and instead live alone. The majority of bee species are solitary: Each female is able to lay eggs and is responsible for her own nest. Many solitary bees create sealed structures for offspring, such as cavity-nesting bees like mason bees or ground nesting mining bees. Instead of receiving their microbiome from shared resources or their mothers, solitary bees build their microbiome from bacteria in their surroundings.

Females fly from flower to flower, collecting pollen to feed their young and picking up bacteria along the way. Some solitary bees have been closely linked to a single strain of bacteria; others are not associated with a certain species, but rather a diverse array of organisms, depending on the diversity of flowers, bees and bacteria in their shared neighborhood.

The microbiome of mason bees

My bee microbiome research launched after I discovered vast amounts of bacteria on my samples. This led me down the difficult road of identifying microorganisms via genetic sequencing – the use of lab techniques to read DNA to match sequences against a reference database to identify an organism. Sequencing requires a large number of samples and it is a time-intensive process and the data analysis takes even more time. It is difficult work, but the results tell a story about how solitary bees build their microbiome.

The bees I work with are cavity nesting, meaning they build their own nests out of soil. Many of my bees’ bacteria originated in the soil, not the surface of flowers, revealing another route of transfer between solitary bees and their environment. I identified bacteria such as Acinetobacter previously linked to other solitary bees, demonstrating the potential for different pollinators to share bacteria on the surface of flowers.

More studies are needed to explore the diversity of bee microorganisms and the links between these organisms and bee health. Every study reveals new discoveries about the role of microbiomes in pollinators. One day we may be able to provide bees with bacteria to benefit them the same way antibiotics helped me get my microbiome back to normal, allowing me to go back into the field to perform my research to identify new associations between bacteria and bees.