What the Bible Tells Us About Dealing With the Coronavirus Pandemic 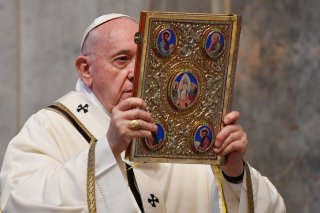 “Death has come up into our windows, it has entered our palaces, to cut off the children from the streets and the young men from the squares.” (Jeremiah 9:20)

Catastrophes have always touched people’s lives. With these words, the prophet Jeremiah addressed a disaster of his time, centuries before the common era.

Scientists are working to explain the causes and origins of the coronavirus with evidence, yet conspiracy theories still abound.

Also, some religious leaders have suggested that the virus is God’s message for people. Whether the conspiracy theory is attributed to political manoeuvring or divine intervention, these theories propose that science does not explain disasters sufficiently for many people.

Throughout history people have believed that disasters carry otherworldly messages. Often these messages propose that people have some responsibility for their present suffering. Such a belief may encourage one to understand the causes of catastrophes so that they can be avoided in the future.

It also suggests that disasters such as a pandemic can teach people something about how life should be lived. The Bible contains many stories of God-sent illnesses which typically communicate punishment for wrongdoings.

Understanding these messages required interpretation and they asked for specific ritual treatment. As a researcher of biblical studies, I study the techniques people used to consult God about the future. Such methods allowed people to prepare themselves for possible calamities held for them in the future.

Understanding the human need to find explanations for the unknown may help us to understand the many non-scientific explanations that people continue to give for the pandemic.

Epidemics in the Hebrew Bible

In many cultures, different gods are responsible for different areas of life. In the stories of the Hebrew Bible (what some refer to as the Old Testament), one God is usually accountable for all spheres of life. Hence, this God has a role both in bringing illness and also in curing from it.

One is the plaque of boils on human and animal bodies (Exodus 9:9). Despite this disaster, Pharaoh does not let the Jews leave. According to the story, Pharaoh himself is not infected by the boils, so that he can witness God’s control: “I have let you live: to show you my power” (Exodus 9:16). In this story, boils are a sign of God’s power.

The Bible seldom mentions doctors, but various religious experts including prophets and priests provide responses to the illnesses. Prophets were considered instrumental in conveying godly messages to people

In a situation of crisis, they explained why God was upset. For instance, prophet Jeremiah warns King Zedekiah that all the inhabitants of Jerusalem will die by the sword, famine and pestilence due to the Israelites’ transgressions.

Whereas prophets delivered godly messages, and helped to uncover the reason of illness, priests communicated with God through rituals. If the cause of illness was God’s anger, only God could provide recovery from it. Therefore, one had to appease the anger.

Priests could do this by carrying out the right rituals.

For example, priests advise the Philistines to return the ark of covenant together with a guilt offering in 1 Samuel 6. Guilt offering was a sacrifice which the priests carried out especially in a situation of an unintentional offence on behalf of the transgressor.

The transgressor had to provide the priest an unblemished ram for sacrifice, monetary compensation for the victim for the loss and a payment for the priest. Biblical legislation determines the guilt offering would settle the offence in front of God.

In the Hebrew Bible it was often more important to address the cause of the disease through a ritual than finding a medical cure to it. One may not have control over their fate, but rituals offered some sense of security in the midst of catastrophes.

During COVID-19 many religious people have turned to their religious responses. Others have engaged with actions that that create connections and care. They do not directly address the pandemic, but nonetheless offer them emotional relief.

People have always searched for meaning in their misfortunes in difficult times. It can be comforting to believe that things happen for a reason and something can be learned in chaotic situations.

Moreover, different explanations allow people to create their own responses to cope with the unknown. Recognizing this human need to rationalize crisis helps us to understand various explanations that people continue to give for the pandemic.