What Colin Powell Can Teach the United States About Winning Wars 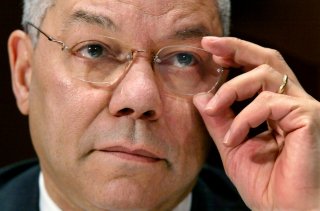 Defense planners should use Gen. Colin Powell’s passing as an opportunity to relearn the lessons of Vietnam that he implemented with great success in the 1991 Gulf War. As Chairman of the Joint Chiefs of Staff, Powell stressed the need to have clear military objectives and a path for victory.

Former Secretary of Defense Caspar Weinberger shared Powell’s view and spelled it out in a 1984 speech with six criteria.

-Vital national interests are at stake.

-The nation is prepared to commit enough forces to win.

-Clear political and military objectives have been established.

-Forces are sized to achieve those objectives.

-There is reasonable assurance of support of American people and Congress.

-Other options have been exhausted before U.S. forces are committed as a last resort.

Enshrining the Powell-Weinberger doctrine in law could ensure that future wars aren’t fought due to faulty intelligence or the passions of the moment.

Powell viewed the military’s purpose as winning wars with overwhelming force, not as a social work organization.

Powell’s view was summarized during his famous speech during the Gulf War about the allied goal in the war.

“Our strategy to go after this army is very, very simple. First, we're going to cut it off, and then we're going to kill it,” Powell said in January 1991 after the start of Operation Desert Storm.

The American public overwhelmingly supported Operation Desert Storm because its goals were clear and its outcome was decisive.

President George H.W. Bush wisely stopped short of taking out Saddam Hussein to avoid becoming enmeshed in any nation-building operations in contrast with what happened after 2003.

The lack of clear goals, a definitive mission, and roadmaps for decisive victory has undermined U.S. credibility.

Powell’s lessons to the nation were forgotten following former president Bill Clinton’s election and his retirement in September 1993.

Military adventurism and so-called “Humanitarian Wars” in places like Somalia, Libya, and Syria, and nation-building in Iraq and Afghanistan became the norm. They undermine American moral credibility both at home and abroad because they feed the perception that the United States constantly invades other countries just to throw its weight around.

Sadly, people remember Powell more today for his speech at the United Nations Security Council in the days before the 2003 Iraq War, which he conceded was a blot on his record.

Powell noted repeatedly over the years that he had told President George W. Bush that “once you break this thing you own it” in the run-up to the 2003 invasion.

The Bush administration ignored Powell’s advice in Iraq and then in Afghanistan as the military operation morphed into nation-building and occupation.

“I went to the president in August of 2002 after coming back from a trip and seeing all of the planning that was underway, and we had a long meeting upstairs in the resident [at the White House], Dr. Rice was there, but it essentially was a conversation between President Bush and myself,” Powell told late PBS anchor Jim Lehrer in 2007. “I not only took him through the planning that was going on at the Pentagon, but I took him through the consequences of going into an Arab country and becoming the occupiers … and we’re going to be responsible for 26 million people standing there looking at us.

“And it’s going to suck up a good 40 to 50 percent of your army for years and it's gonna take all of the oxygen out of the political environment, and you need to understand this and the expense is going to be enormous.”

He acknowledged in a 2011 interview that the Bush administration didn’t act like it “owned” what happened in the aftermath of the invasion of Iraq.

“By owning it, I mean owning it long enough to stabilize it and give it back to the Iraqis,” Powell said.

Congress should enshrine the Powell-Weinberger doctrine into law to prevent the United States from sliding into unwinnable wars without clearly defined goals. Congress should also require that all major intelligence analyses presented to the president and to Congress undergo a mandatory critical analysis that would rigorously question the underlying intelligence sources and methods.

Groupthink always leads to disaster. Encouraging dissenting views and a slowed-down deliberative process can give the public, the president, and the Congress a higher degree of certitude about the cause of war in the event the U.S. finds itself in a situation where such deliberations are needed.

A Powell-Weinberger Act would enshrine the lessons of our past military failures into law and hopefully ensure that the United States does not go to war without thinking about the consequences; that it has a strategy to win in place; and that most importantly it has wide popular support.