What Comes After the F-35: A 6th Generation Stealth Fighter with Lasers? 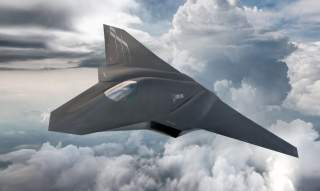