What Do We Know About Kim Jong Un's Rumored Illness? 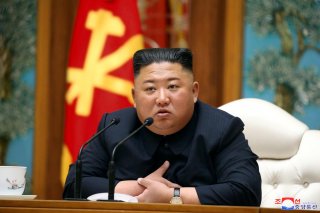 Reports and speculation about Kim Jong-un’s failing health offer an excellent opportunity to examine several characteristics of the U.S.-North Korea relationship. Specifically, the rumors about Kim’s health is a sobering reminder of all the things that Americans don’t know about North Korea.

The most obvious takeaway from Kim’s potential health crisis is the difficulty of having accurate information about what is going on in North Korea. The silence of North Korean officials and state media on Kim’s health has not helped provide concrete answers. Kim might be gravely ill, but other high‐​ranking North Korean officials have disappeared from public view only to turn up fine later. There have also been instances where the supreme leader has been deathly ill in secret while the outward facing parts of North Korean government and society continue normally. Kim Jong-un’s father, for example, suffered a massive stroke in August 2008 that was kept hidden from the rest of the world for several months.

One of the positive potential outcomes of Donald Trump’s controversial decision to meet with Kim in leader‐​to‐​leader summits was the information about Kim that such meetings could bring to light. The conversations that Kim and Trump had at the summits, both official negotiations and informal banter, offered potential insight about Kim’s personality, thinking, and priorities that would be very difficult to determine without that kind of contact. This is also the silver lining of the letter diplomacy that the two leaders have done since the failure of the Hanoi summit in February 2019.

Other important known unknowns being highlighted by Kim’s health scare have to do with North Korea’s nuclear arsenal. If the supreme leader is incapacitated, who has the authority to use nuclear weapons? Are nuclear forces placed on heightened alert and dispersed given the uncertainty of the country’s leadership, or do missiles and warheads remain in their garrisons and hunker down for protection?

Questions about North Korea’s nuclear command and control in a time of leadership succession aren’t entirely new. North Korea tested two nuclear weapons before Kim Jong‐​il died in 2011. However, North Korea’s nuclear arsenal is much larger and more diversified today and includes missiles capable of reaching the continental United States. Thankfully Kim’s health crisis didn’t happen in 2017 when the United States and North Korea were on the brink of armed conflict, but the uncertainty about what happens to the North’s nukes if Kim is incapacitated is still a very serious matter even in peacetime.

Switching the focus of U.S. engagement with North Korea from denuclearization to arms control could help with answering the questions about North Korea’s nuclear command and control. The Trump administration’s insistence that Kim must give up his nuclear weapons before any kind of sanctions relief or other forms of engagement can occur has not yielded any benefits for the United States. Prioritizing arms control and risk reduction will still be difficult, but South Korea has had some success with reducing conventional military instability by setting narrower goals. Getting North Korea to agree to greater transparency about its nuclear command and control procedures will be an uphill battle. Yet a change in the U.S. approach could start answering the weighty questions about how North Korea organizes its nuclear forces.

Finally, the uncertainty about Kim’s health should serve as a reminder of the importance of maintaining good relations with South Korea and China. Every state working with North Korea will be constrained by the difficult information environment outlined above, but China and South Korea are both in better positions to have unique insight into what is happening with Kim Jong‐​un than the United States due to more frequent (albeit not entirely “normal”) interactions.

If Kim is indeed dead, then Washington would want to have some kind of communication with Seoul and Beijing about how to deal with a new North Korean leader. Unfortunately, both the U.S.-China and U.S.-South Korea relationships are going through problems. The COVID-19 pandemic is badly damaging the U.S.-China relationship as both countries accuse the other of worsening the health crisis. Meanwhile, military cost‐​sharing negotiations with South Korea have deadlocked and raised problems for the U.S.-South Korea alliance. The United States might be able to coordinate with Beijing and Seoul despite these challenges, but strained U.S. relations with friend and foe alike won’t make such coordination any easier.

Only time will tell if the current rumors of Kim Jong-un’s demise are right or wrong. In any event, this period of uncertainty is a reminder of just how opaque North Korea remains to the United States.

This article by Eric Gomez first appeared in CATO on April 4, 2020.

Image: North Korean leader Kim Jong Un takes part in a meeting of the Political Bureau of the Central Committee of the Workers' Party of Korea (WPK) in this image released by North Korea's Korean Central News Agency (KCNA) on April 11, 2020. KCNA/via REUTERS​.