What Does China Plan to Do With Its New Assault Ship? 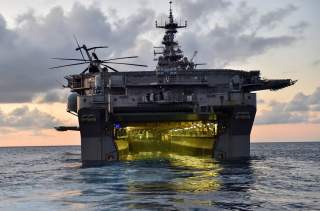 Key point: The Type 075 LHD will allow Beijing to land its Marines on hostile shores and to send in helicopters to back them up. The U.S. Navy has many such ships and China is looking to copy those capabilities.

The incomplete hull of the first Type 075 LHD apparently is visible in June 2019 commercial satellite images of the Hudong–Zhonghua shipyard in Shanghai.

China lacks a jump jet, so the country for now doesn’t have the option of deploying LHDs as carriers. But LHDs in Chinese service could help the PLAN assert Beijing’s claims to disputed China Seas territories as well as join smaller Type 071 assault ships in any Chinese assault on Taiwan.

“A landing helicopter dock-type amphibious assault ship has long been predicted for the PLA Navy in the years after the 071 landing platform/dock emerged,” Rick Joe wrote at The Diplomat in late 2018. “One export model LHD has been showcased, displacing about 20,000 tons, but the PLA Navy’s future LHD will likely be substantially larger.”

The designation of the LHD is 075; however, in earlier years it has been incorrectly named as 081 in a number of publications. The 075 is thought to have a full displacement less than 40,000 tons, perhaps around 36,000 to 38,000 tons. Such a displacement would be smaller than the America or Wasp classes in service with the U.S. Navy, but would still be the largest non-U.S. LHD or LHA by a significant margin.

Currently it is thought that three 075s have been ordered by the PLA Navy, with initial work on the first two having commenced within the last year or more. The class is to be built at Hudong Zhonghua shipyard, the same facility that built all of the PLA Navy’s 071 LPDs.

Considering the timespan in which the rumors about the lead 075’s construction began to emerge, it is likely that photo confirmation of the lead 075 will be attained within the next year or so, likely in a late stage of assembly before the ship is ready to launch.

The Chinese navy’s amphibious fleet in recent years has grown and improved. “China’s investments in its amphibious ship force signal its intent to develop expeditionary warfare capabilities,” according to the 2019 edition of the U.S. Defense Department’s annual report on Chinese military developments.

“Large-scale amphibious invasion is one of the most complicated and difficult military operations. Success depends upon air- and maritime-superiority, the rapid buildup and sustainment of supplies onshore and uninterrupted support.”