This What Happened When Russia's Spy Submarine Caught Fire And Sank 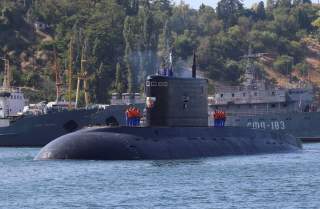 Key point: The immediate cause has not been officially confirmed at the time of writing.

A fire broke out on a Russian research submarine earlier this week, killing fourteen sailors in what is Russia’s worst submarine disaster since 2008.

Russian authorities have remained tight-lipped on the nature of the data being collected by the submarine and the circumstances of the fire. "On July 1, fourteen submariners - sailors died in Russian territorial waters as a result of inhaling combustion products aboard a research submersible vehicle designated for studying the seafloor and the bottom of the World Ocean in the interests of the Russian Navy after a fire broke out during bathymetric measurements," reads the Defense Ministry’s press release.

As of the time of writing, the Russian government and its official channels have abstained from naming the submarine in question; however, it is widely believed to be the Project 210-- also known as AS-12, with “AS” referring to “nuclear deepwater station”-- Losharik special missions submarine. Losharik is speculated to be a pillar of Russia’s deepwater intelligence gathering program, headed by the Main Directorate of Deep-Sea Research, or GUGI.

Russian President Vladimir Putin has since spoken on the matter, but only to express his condolences. Putin added that the submarine was an “extraordinary” vessel, manned by “a highly professional crew.” Seven of the fourteen sailors held the rank of captain and two were “heroes of the Russian Federation” (Russia’s highest honorary title), corroborating the speculation that Losharik occupied a high-level role within GUGI.

Defense Minister Sergei Shoigu announced that the vessel was saved from sustaining irreversible damage “thanks to the self-sacrificing actions of its crew” and can be fully repaired in the near future. Russian news reports have focused on what they describe as the heroism of the 14 sailors, who allegedly sealed themselves off in a section of Losharik to prevent the fires from engulfing the entire submarine.

Deservedly or not, the specter of the Kursk disaster looms large over the Losharik fire. As the Russian media outlet Ekho Moskvy put it, “Absolutely nothing is known at the moment - who, what... I don’t understand one thing: why did a day go by and only then did they make a statement about the deceased... why don’t we know their names? Is this normal?”

When the Oscar II-class Kursk submarine sank in 2000, the Russian government was widely accused of offering a bungled response: notably, issuing conflicting statements as to the cause of incident, dragging its heels on revealing the number and names of the 118 victims, and refusing international help despite lacking the technical means to salvage the destroyed submarine themselves. The Kursk fiasco demonstrated that, in the age of global mass-media, attempting to sweep such major tragedies under the rug will only incur bigger PR problems down the line.

The Kremlin has taken steps to assuage accusations of excessive secrecy, releasing key additional information over the past several days. The names of the fourteen deceased sailors, along with their ranks and pictures, were published yesterday by the Defense Ministry. Shoigu revealed earlier today that the fire began in the battery compartment of the submarine.

The immediate cause has not been officially confirmed at the time of writing. Leading Russian newspaper Kommersant reports that the investigation is still ongoing, but the current top hypothesis of experts familiar with the case is a short circuit.

Losharik, while not quite not one-of-a-kind, was a highly specialized vessel staffed by an elite crew; its temporary loss threatens to stymie the pace of Russia’s ongoing deepwater research and intelligence gathering efforts.