What Happens to Afghanistan’s Gold Reserves? 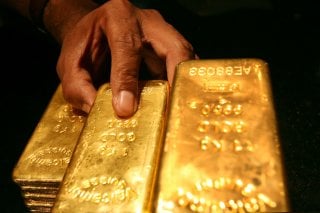 Unfortunately for the Taliban, the bank’s cash reserves—consisting of hard currency, gold, and a variety of other valuables—mostly remain far beyond their reach. The majority of Afghanistan’s financial reserves are held within the Federal Reserve Bank of New York, which houses the gold reserves of many developing nations for safekeeping.

A year-end DAB report dated from December 2020 revealed that the central bank had stored gold worth 100 billion afghanis—or $1.32 billion—inside the Federal Reserve. The statement also revealed that around $6 billion of the bank’s holdings had been invested in U.S. Treasury securities inside the United States.

DAB’s governor, Ajmal Ahmady, fled the country on Sunday. He described the series of events leading to his exile on Twitter.

The Taliban are also likely to be denied access to Afghanistan’s “special drawing rights,” or SDRs, held by the International Monetary Fund, according to Reuters.

While the Taliban are unlikely to recover most of the previous government’s reserves, the Taliban did gain a substantial amount of money from its rapid offensive in July and August. Some of DAB’s foreign currency reserves, overwhelmingly in the form of U.S. dollars, were stored at the bank’s various branches throughout Afghanistan, which are now entirely under the group’s control. The value of these holdings is estimated at around $360 million.

The central bank’s vaults also contained around $160 million in gold and silver, and the “Bactrian Treasure,” a priceless hoard of golden artifacts from Afghanistan’s past. It is unclear how much of this the group was able to obtain, as the administration of President Ashraf Ghani had several weeks to send it to safekeeping before the Taliban’s capture of the city.

In Kabul, the Taliban has maintained its control of the treasury building, and issued a statement on Saturday that it would be “strictly guarded.”