What Happens After Russia Invades Ukraine? 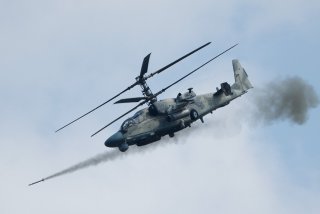 Micael Bydén, the supreme commander of the Swedish Armed Forces, gave a wide-ranging interview to Defense News this month. The first part of the discussion centered on the prospect of open military conflict between Russia and Ukraine.

“The military confrontation has been there since 2014,” Bydén said when he was asked to assess Russian intent. “You should never underestimate a country that has now built up their capabilities over time . . . If we’re close now to some kind of a major operation, I wouldn’t go into that discussion. But this is really the question right now, and that’s why it’s so important to talk to our partners.”

Russia’s defense ministry published a draft agreement earlier in December containing a list of security demands vis-à-vis the U.S. and NATO. Top Russian officials have threatened a “military-technical” response if the proposals, which include legal guarantees against NATO expansion and limitations on the deployment of foreign troops in the post-Soviet sphere, are rejected. “We have nowhere to retreat,” said Russian president Vladimir Putin during a recent press conference. “They have pushed us to a line that we can't cross. They have taken it to the point where we simply must tell them: ‘Stop!’”

Moscow has not outlined the concrete military steps it intends to take if negotiations with Washington and NATO were to break down. Negotiations are slated to commence in early January. “One should not be surprised if they act, but what would the act would be” It’s really hard to be very clear and 100% sure,” Bydén said. “This is the tricky question.”

Asked what Sweden would do if Russia invades Ukraine, Bydén said the “[political] support to Ukraine has been there over time,” adding that the relationship encompasses training, advising, and exercises. “We would continue on; we would probably add more in that direction,” Bydén noted. “There’s clear support from the Swedish side to Ukraine, whatever happens.”

The top Swedish military official demurred when asked about his confidence in a U.S.-NATO response to a potential Ukraine invasion scenario. “When I spoke with Gen. Milley yesterday [Dec. 14], I also expressed my appreciation for the very clear support they have given us―meaning sharing information, sharing their views―because it has been very transparent and open,” he said.

President Joe Biden has ruled out U.S. boots on the ground in Ukraine, with the White House instead confining its potential response to economic and diplomatic sanctions. Defense Secretary Ben Wallace echoed Biden’s position in an interview with Spectator TV earlier this month. “It’s a fact it’s [Ukraine] not a member of NATO, so it is highly unlikely that anyone is going to send troops into Ukraine to challenge Russia…” he said. “We shouldn’t kid people on that we would.”