What Happens if a Battleship and Submarine Had a Baby? 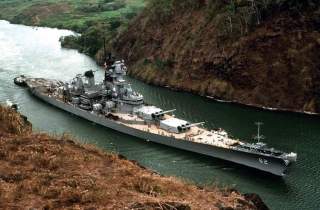 Key Point: With the advent of nuclear power and the guided missile, the seemingly goofy idea of a heavy surface-attack submarine became an impressive and chilling reality.

A century ago submarines presented as much of a challenge for naval war planners as drones do today. Like airborne and surface stealth decades later, underwater stealth was a game-changer—but how to use it?

Until the missile age, a wide variety of naval missions and vessels tried applying the submarine’s advantages to best use. From early on, planners envisioned submarines carrying out commerce raiding, minelaying, shore bombardment and intelligence collection—besides the sub’s obvious role in fleet attack.

Deck armament often equaled that of coastal and riverine gunboats—one or two artillery pieces plus several machine-gun mounts for anti-aircraft and surface attack. During these engagements, a five- or six-inch deck gun could wreak havoc on upperworks, steering gear or shoreline structures. Machine guns could rake decks and lifeboats.

But convoys of armed merchantmen and their destroyer escorts were another matter. So was stealthy shore bombardment of coastal bases and defenses. These missions inspired truly remarkable undersea ‘cruisers.’ These were truly big-gun submarines.

The British Admiralty appears to have kicked off the idea with its extraordinary response to reports of the Kaiser’s new U139-class subs, which packed 5.9-inch guns. In 1916, the Committee on Submarine Development chose to mount 12-inch guns—battleship guns—on submarines.

Four of the disastrous K-class steam submarines—K18 through K21––were reconfigured into the diesel-powered M-class. The giant subs were more than 295 feet long and were 24 feet in diameter, and each carried a single surplus 12-inch naval rifle from the Formidable-class battleships in a watertight turret.

While the M-class boats mounted four 18-inch torpedo tubes with a reload apiece, doubts about the torpedoes’ efficacy buttressed arguments for the guns. From a submerged posture, the subs could lob 850-pound shells over the better part of a mile.

An M-class monitor lined up on her target at periscope depth then surfaced to expose some six feet of her weapon’s barrel. Using the periscope as an optical sight, the commander aligned a simple bead sight on the barrel’s tip—like aiming a submerged rifle using its bead sight and a pair of binoculars—and ordered the gun fired.

The sub then immediately submerged, the whole operation taking only 30 seconds. An all-up ammunition magazine and lift supplied 50 rounds—but the gun could not be reloaded while submerged.

That such odd limitations severely constricted the M-class subs’ wartime effectiveness was moot. None of the subs saw action in World War I, but inter-war experimentation within treaty restrictions continued throughout the 1920s and 1930s. Surprisingly, the “submarine cruiser” concept survived the war and reached its baroque apex in some very large . . . and strange subs.

By the time the Royal Navy’s X-1 launched on November 16, 1923, the 1922 Washington Naval Treaty had dramatically reshaped the post-war balance of sea power. The treaty restricted the size of guns permitted aboard submarines, and banned the targeting of merchant vessels.

Despite crippling mechanical shortcomings, especially her terrible engines, the X-1 made a great submarine cruiser—a type of warship the Washington Treaty specifically forbade. Consequently, the British Government remained very cagey about the X-1. Her poor maintenance record didn’t help. After the vessel literally fell over in a drydock in 1936, the Admiralty scrapped her.

The M-1 suffered equally bad luck—a Swedish freighter accidentally knocked her turret off and she sank with all hands in 1925. After the loss of the M-1, the Royal Navy removed the turrets from M-2 and M-3 and scrapped M-4 altogether. M-3 became a large stealth minelayer with capacity for 100 sea mines mounted in a deployment rack running along the back of the vessel.

Even as the British tried to operationalize the big-gun sub, the French navy doubled down on the concept with its planned “corsair submarines,” a thoroughly dashing Gallic term. Only the first of the three, the Surcouf—named for a famous French privateer—was ever built.

Like the X-1, the French giant sub was the largest in the world when launched in October 1929—over 363 feet long, almost 30 feet in diameter, with a range of 7,800 miles at 13 knots. Surcouf could bring to bear her twin eight-inch guns on targets and track them with a 16-foot rangefinder from nearly seven miles away.

To supplement her reconnaissance and gunnery range, Surcouf—like M-2—carried a collapsable floatplane in a watertight hanger. Though never used in combat, the small Besson MB.411 seaplane could call in long-range ship sightings and gunfire corrections to the submarine.

The later, even larger Japanese  I-400-class submarine aircraft carriers extended the aircraft-as-long-range-artillery concept to its mid-century conclusion. The huge subs mounted five-inch deck guns and anti-aircraft machine guns, but relied on their embarked aircraft and their weapons for main firepower.