What If the Coronavirus Recession Gets Worse Than Expected? 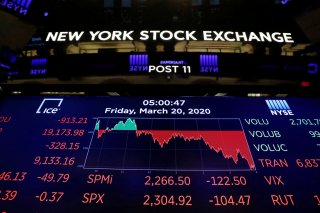 Whenever the government substantially intervenes in the U.S. economy, you can bet there will be commentators worried about inflation.

Nine times out of 10, I’d be inclined to agree. But not now.

That’s because it’s increasingly apparent that we’re headed toward an economic downturn that will be deeper and longer-lasting than many commentators realize or are willing to admit.

The shutdown of large sectors of the U.S. economy has massively reduced our production and supply of goods. Without people working, fewer goods and services can be made. The result is a reduction in output, but also upward pressure on prices as certain goods become harder to find (think toilet paper and cleaning products).

Indeed, the well-known investor Ray Dalio of Bridgewater Associates has predicted that corporate losses in the United States alone from the coronavirus pandemic will total $4 trillion, and worldwide might top $12 trillion. To say this is unprecedented would be an understatement.

Of course, the economy isn’t just experiencing a shift in supply—a big shift in demand is happening, too. As workers are laid off, millions will have less cash to purchase the items they want and need, and demand will begin to dry up, if it hasn’t already. You can’t buy what you can’t afford, and the recently passed aid will at best serve as a short-term stopgap that won’t come close to making Americans whole.

Temporary income replacement might be good enough, for now, to prevent liquidation of mortgages and allow people to tread water, but it is unlikely to be sufficient as the crisis drags on. The reduction in demand will only reduce production even more, bringing further declines in economic growth as we begin to knock on recession’s door. Recent estimates are that growth over the next quarter could decline by as much as 30 percent.

The reason why inflation isn’t a concern as the government undertakes its latest $2.2 trillion spending package should be obvious now: demand—and prices—will crater absent intervention. Sure, there’s always a possibility that the old 1970s boogeyman of stagflation could rear its ugly head, but the evidence so far from the marketplace seems to indicate otherwise.

The breakeven inflation rate on the ten-year Treasury bond—the best estimate we have of inflation expectations during the next decade—completely fell off a cliff as social distancing and the closing of non-essential businesses became the nationwide norm.

They’ve bounced back a little recently as lawmakers negotiated the stimulus package, but expected inflation still sits well below where it was before the coronavirus crisis began, and indeed, lower than at any time since the 2008-2009 recession.

Ultimately, inflation will rise only if wages rise, and that’s just not going to happen with the record number of unemployed announced last week. As the crisis deepens, those figures, which likely underestimate the true unemployment picture, are only going to worsen.

To the degree that the stimulus package gets checks in people’s hands and helps them pay expenses for the time being, that fall in demand will be stabilized. But this just won’t be possible if the crisis takes longer than expected to resolve.

The United States—and indeed, the world—currently finds itself in a situation unlike any past crisis we have experienced in our collective memories. This is not 2008, and it’s not 2001. It’s more akin to an asteroid approaching the earth, requiring the people of the world to pool their resources and work together to avert the existential threat.

An asteroid, by the way, that it’s increasingly less likely that we’ll be able to avoid.

One of the biggest difficulties with doing analysis in the social sciences is the problem of the counterfactual. If policymakers take some action, we have no way of knowing what life would have been like if that response hadn’t taken place.

In the case of coronavirus, if social distancing measures are effective, there is likely to be a chorus of people who will insist we overreacted. We know this because we’re already seeing it. But what if those measures aren’t effective?

Policymakers have some tools in their toolkit that can help in the short-run, but if the public health crisis extends beyond a couple months, we’re in for a whole lot more trouble than many have considered. We’d be wise to start thinking now about what that will mean for our economic health and well-being.

Jonathan Bydlak is the director of the R Street Institute’s Fiscal & Budget Policy Project and the creator of SpendingTracker.org.