What India's Hedging Over Ukraine Means for the West 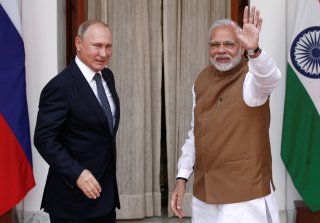 “Europe has to grow out of the mindset that Europe’s problems are the world’s problems but the world’s problems are not Europe’s problems,” barked Subrahmanyam Jaishankar, India’s influential minister of external affairs and a man of unusually refined sartorial sense for that part of the world, in response to a meek question in Slovakia about India’s balancing act over Ukraine. “This is the construct you are trying to impose on me and I don’t accept it,” he said when asked whether India needs to “choose a side.”

“I am one-fifth of the world’s population, I am today the fifth or sixth-largest economy in the world, I mean forget the history, civilization bit, everyone knows that I, think I am entitled to have my own side,” Jaishankar continued.

I am currently in India for a weeklong trip and the impression I have is that the West is severely misreading India’s foreign policy alignments which, to put it politely, is equidistant. The local news media, especially in local languages, four of which I speak, and the national English media, fully support this detached approach and newfound “arrogance” of Indian foreign officers and diplomats. One Indian analysis compared it to Nehru’s famous speech, where he laid out India’s non-alignment posture.

“May I say, as a representative from Asia, that we honor Europe for its culture and for the great advance in human civilization which it represents? May I say that we are equally interested in the solution of European problems; but may I also say that the world is something bigger than Europe, and you will not solve your problems by thinking that the problems of the world are mainly European problems? There are vast tracts of the world which may not in the past, for a few generations, have taken much part in world affairs. But they are awake.”

Jaishankar is no Nehru, who was a misguided idealist and saw the world in civilizational terms. Jaishankar, a product of St. Stephens and JNU (India’s Eton-Oxford) and a career foreign service officer, embodies a ruthless imperial civil service legacy that is increasingly married with a newer form of a classical and amoral Kautilyan realism. Hedging is a delicate exercise, he once wrote, adding that it is the only mode of survival under conditions of an emerging multipolarity. In that regard, Jaishankar is closer to Emanuel Macron and Viktor Orban, Europe’s two preeminent hedgers.

Jaishankar is arguably far more perceptive than the Anglo-Americans currently determined to double down on failed policies focussing on Russia, which led to other rich powers free-riding on Anglo-American treasure and muscle. Consider that India’s two critical acts regarding the war in Ukraine were to ensure that the Indian medical students in Ukraine got enrolled in Hungary and that Russian gas was bought cheap and then allegedly sold to Europe at a higher price.

The Indian economy’s long-term prospects are starting to seem shaky. The continuity of the Vajpayee era right nationalist government and the Manmohan Singh era liberal internationalist government is also coming to an end. All of these changes are connected and understudied. The previous governments of the right-liberal Bharatiya Janata Party (BJP) and the left-liberal Congress party had an international outlook. The current BJP government is different and of a more faith-flag persuasion. With economic downturns, the country is reverting to its old norms of religious bloc formations and Anglo-bashing, which in this case is evident from India’s hyper-democratic and overly sensitive online chatter. This is not a judgment but an observation. Added to that is the genuine and somewhat justified rage at Western commentators, especially the sanctimonious American media, on issues ranging from Covid-related double standards to grander ideas about strategic autonomy, sovereignty, and reactions against transnational human rights activism.

There is a need for an urgent analytical reassessment. Can New Delhi be relied upon during a similar military crisis in Asia? What are the very understandable limits of alignment and interests? Can a similar governing system and common English language be enough of a glue to tie a massive sub-continent-sized power with the rest of the liberal democratic bloc? Or will economic upheavals, philosophical outlook, civilizational and majoritarian jingoism, and performative post-colonialism that sometimes verges on sheer grudge form a potent mix of domestic and international discontent? Conventional bipartisan wisdom in Washington dictates that India, part of an anti-China balancing coalition and a major democratic power with a strong economy and English literacy, is firmly on the side of the West given increasing military interoperability and ideological alignment. What if, for the sake of probability, the conventional wisdom is thoroughly misplaced and merely reflective of The Blob’s analytical bubble?  The West seemed perplexed when New Delhi tacitly took Russia’s side. The West will be catatonic if a military crisis hits the Indo-Pacific and the floor is found absent under its feet.