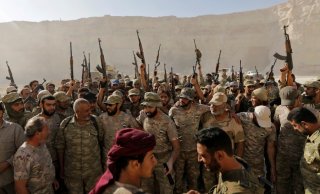 The new escalation of violence between Azerbaijan and Armenia over the breakaway Nagorno-Karabakh region has claimed nearly 5,000 lives in less than a month, Russian President Vladimir Putin warned on October 23. Two rounds of Russia-brokered ceasefires, as well as a U.S. diplomatic attempt to halt the fighting, have so far faltered, with the warring parties accusing each other of violating the truce. Apart from military casualties, scores of civilians from both sides have been killed in the fighting, the longest and deadliest since the 1994 ceasefire agreement between Baku and Yerevan. Compared to the original hostilities and their negotiated cessation in the early 1990s, a new factor fueling this round of conflict and complicating multilateral efforts to negotiate a peaceful resolution is the active deployment of foreign fighters on the battlefield.

What is happening in Nagorno-Karabakh in terms of the presence of foreign fighters increasingly resembles the situation in Syria, where Iran and Turkey have been on opposite sides of the civil war. In both terrains, using foreign mercenaries has allowed the patrons to pursue their goals at lower financial and human costs, but it has also entailed significant political and security risks.

From the very early days, reports emerged that Turkey was deploying Syrian mercenaries to the region to help Azerbaijan. CNN reported on October 1 that Syrians affiliated with the Turkish-backed “Syrian National Army” (SNA) were being recruited to fight on the Nagorno-Karabakh front in exchange for a monthly salary of $1,500. According to the Syrian Observatory for Human Rights (SOHR), as of October 18, more than 2,000 Syrian militants had been dispatched from Syria to Azerbaijan, of which about 135 have already been killed. These accounts quickly met with international reactions, especially from Azerbaijan and Armenia’s neighbors.

On October 1, the Russian Foreign Ministry issued a statement expressing “deep concern” over the dispatch of fighters from Syria and Libya to Nagorno-Karabakh. The statement did not directly mention Turkey. However, in a phone conversation with his Turkish counterpart Recep Tayyip Erdogan on October 14, President Putin reiterated Russia’s “serious concern” over the presence of fighters from the Middle East in the enclave. Similarly, Iranian President Hassan Rouhani pointed out on October 7 that the presence of foreign fighters near Iran’s borders would not be tolerated. “It is unacceptable for us that some [states] want to transfer terrorists from Syria and elsewhere to [our] region and to the areas close to our borders, under various pretexts,” Rouhani said. Meanwhile, Ali Akbar Velayati, the Iranian supreme leader’s advisor on international affairs, warned that if the reports of the arrival of “Al-Qaeda and ISIS extremists” in Karabakh were true, all those who are behind such a move would be held responsible.

The Islamic Republic typically argues that its (para)military intervention in Syria came at the request of the Syrian government, with the primary aim of helping Bashar al-Assad’s forces liberate the whole of Syrian territory from the grip of rebel groups and their foreign sponsors. In recent years, Iran-organized Shiite fighters from Afghanistan, Pakistan, Iraq, and Lebanon have played a decisive role in the Syrian army’s victories over the rebel and extremist groups. However, Iran has mostly denied having a direct role in deploying and equipping those fighters, calling them popular and volunteer forces. Similarly, in the case of Nagorno-Karabakh, Turkey’s indirect support for Azerbaijan through the militarized use of mercenaries gives Ankara an element of deniability and a chance to evade responsibility for its key role in the conflict. At the same time, Turkish officials seek to justify their stance by stressing the need to end the Armenian occupation of Azeri lands.

The current situation on the Nagorno-Karabakh front is increasingly similar to the situation on Syria’s Idlib front earlier this year. In the latest round of the Syrian army’s operations to retake the northwestern province of Idlib in January-February, Iran-backed groups including Afghan and Pakistani fighters of Fatemiyoun and Zeinebiyoun brigades were actively present in the fighting. Earlier, Tehran and its affiliates had avoided a direct presence on the Idlib front. An important reason for this was Iran’s unwillingness to antagonize Turkey, which shares a long land border with the Idlib province. Iran’s change of approach and deployment of proxy forces to the Syrian rebels’ last bastion prompted Turkey’s response, pushing Tehran and Ankara to the brink of direct conflict in Syria. As such, increasing utilization of militancy as an instrument of regional policy carries significant risks.

The presence of foreign mercenaries will likely lead to further complication and prolongation of regional crises, making them more difficult to resolve politically through diplomatic negotiations. Along with Russia’s direct military support for the Syrian government, the sustained involvement of Iran-backed forces has been an important factor augmenting Assad’s determination to continue military operations in different parts of Syria.

Similarly, in Nagorno-Karabakh, the abundance of cheap militant labor for fighting allows Azerbaijan to continue military operations against Armenians without incurring a casualty toll big enough to deter Baku or incentivize it into peace negotiations. This was one of the main reasons for the failure of Russia’s ceasefire initiative, as well as a second ceasefire agreement, which was supposed to begin on October 19. Furthermore, the deployment of foreign mercenaries to border areas could provoke neighboring countries into taking pre-emptive or preventive measures that would ultimately fuel and spread the crisis. Although the main intention behind Turkey’s decision to deploy Syrian and Libyan mercenaries to the South Caucasus was not retaliation against Iran for dispatching its proxies to Idlib, the Nagorno-Karabakh crisis could enter a more dangerous and destabilizing phase should Tehran decide to take direct action against those forces.

The use of foreign mercenaries by regional powers also has long-term consequences. The difference between local and foreign proxies should be noted in this regard. Both Iran and Turkey have long used local proxies in Syria. While Turkey organized the Free Syrian Army at the beginning of the Syrian crisis, the Islamic Revolutionary Guard Corps (IRGC) formed the National Defense Forces (NDF) with the aim of organizing local elements to assist the Assad regime. But unlike local proxies, foreign fighters are often ethnically and religiously different from the demographic composition of the areas to which they are deployed. Iran-backed Shiite forces are alien to the predominantly Sunni population of Idlib, just as the Sunni extremists deployed by Turkey might not fit smoothly in Azerbaijan’s Shiite-majority sociopolitical environment. If the crisis drags on and the presence of those forces persists, the likelihood of clashes between them and local residents will grow. In other words, although foreign mercenaries may be a cost-effective asset to turn the tide of fighting in a local conflict in the short term, they sow the seeds of new conflicts in the long run.