What It's Like to Be An Uber Driver: 80 Hour Work Weeks and Tons of Waiting 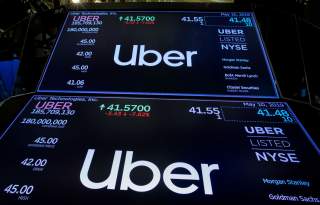 Uber’s upcoming initial public offering may be one of the biggest in history, with the ride-hailing company expected to raise up to US$9 billion.

That’s good news for its early investors and executives, who could reap $1.3 billion from the IPO.

For the potentially hundreds of thousands of drivers who do it as their largest or main source of income? Not so much. That may be why some of them plan to go on strike in seven U.S. cities for 12 hours on May 8.

For the past two years, I’ve spoken with dozens of full-time Uber and Lyft drivers in Seattle to get an on-the-ground understanding of how the technologies supporting the platform-based gig economy are affecting workers.

Their stories help illustrate why so many of them find it difficult to earn a living wage as an app-based driver.

To see why, it helps to understand how Uber operates – and why investors value it so highly.

Uber doesn’t see itself as a transportation company. Rather, it sells itself as a technology middle person that efficiently connects riders to “transportation providers” with its algorithms. Uber’s ads boast that drivers can move from “earning” to “chilling” with a push of a button, making it easy to “get your side hustle on.” Lyft similarly promises “you’re free to drive, earn and get paid when you choose.”

Researchers have found that many of its drivers do in fact enjoy this flexibility as most use Uber or Lyft infrequently as a side gig – or until they have earned the promotional bonus. But many others – perhaps as many as two-thirds in some areas – rely on it as their largest source of income.

These drivers are the ones who make it possible for Uber to honor a key selling point to investors: near-instant driver availability. Uber’s aim to provide consumers a ride within five minutes of a click was considered a key differentiator from taxis even before it launched in 2009.

That availability necessitates a legion of essentially full-time drivers who spend many unpaid hours waiting – not “chilling” – until a fare comes their way. Drivers are only paid once they pick up a passenger. Every minute they spend waiting for a pickup or even driving to meet a rider they are simply losing money.

To better understand how drivers navigate this challenge, I interviewed 63 drivers for Uber and Lyft as well as union organizers and policymakers in Seattle over the past two years.

The research is for a book I’m working on and part of my ongoing examination of media’s role in labor management, a project that looks at how managers have used different types of media – from film that showcased efficient manual workers back in the early 20th century to today’s apps and algorithms – to nudge workers to be more productive. At the same time, they typically insist their use of new technologies will be good for workers as well.

But the drivers I spoke with shared a very different experience. And Uber’s own data suggests that drivers spend about half of their time on the app without a fared passenger. The ones I interviewed said that waiting time could be even longer.

The three stories below are typical of the other 60. All names are pseudonyms to protect them from retaliation.

Waiting on a fare

Ayele, a middle-aged married father of two who’s been driving for Uber and Lyft for more than six years and currently works only for the Uber Black luxury service, estimates that more than half of the 80-plus hours he’s on the app each week is spent waiting for a fare. He says there are days where he’s spent as many as 16 hours on call in order to get just a few passengers.

While the long waits are necessary to make ends meet – he sends money to his father, sister and other relatives in Ethiopia – he earns “way below” the minimum wage of $15.

Ayele, whom I interviewed at a Teamster’s hall outside Seattle, is a member of the App-Based Drivers Association, a union that’s been pushing for regulations that would require living wages for drivers.

He told me he joined the union because the rising number of drivers and falling incomes made him realize “there is a necessity to be united.”

‘A gift from the Lord’

Muhsin, a five-year veteran of Uber and Lyft, also works as much as 80 hours a week.

He says he earns just $9 to $12 an hour after expenses and wait time, which is around the national average found in studies by the Department of Labor, Economic Policy Instituteand Ridester. Ridester’s late 2018 survey, for example, suggests drivers earn a national average of less than $10 an hour after expenses, which for a 40-hour workweek would be below the poverty threshold for a family of three.

Muhsin puts in such long hours, even at low pay, because he views it as his familial and God-given responsibility to send money to his poor relatives “home” in Somalia.

Salim, a 58-year old Ethiopian driver for Uber Black, jokingly described his profession as a waiter. “I wait a lot.”

When asked what he does while waiting, he shrugged his shoulders, emphasizing that he “cannot plan … because you always wait for the phone call.”

As a father of two children under 12 and one adult son who depend on his income, Salim could not afford to miss answering the app’s call because doing so puts him at risk for a low acceptance rate, which can lead to “deactivation.”

Salim said it can also be emotionally and physically stressful. Studies have shown that the long, unpredictable and underpaid hours can lead to physical, mental, emotional and marital strain.

Salim himself says he’s witnessed three drivers collapse while waiting in the uncovered airport parking lot during the summer months. The airport only recently added portable toilets and running – though not potable – water, which alleviates some of the physical stress of waiting.

Unions that represent drivers are trying to find ways to ensure their members get paid for all this time spent being on call.

A new law that took effect in New York City in February requires ride-hailing companies to pay their drivers at least $17.22 an hour after expenses, a figure that’s meant to account for idle time. Unions in Los Angeles, Seattle and elsewhere are pushing for similar laws – as well as ways to appeal the deactivation of a driver’s account.

So as early investors and executives for Uber and Lyft – which raised $2.34 billion in its own IPO in March – collect their windfalls, they should spare a thought for the drivers who made it possible.

“We are the engine of the company,” said 42-year-old Ahmad, a father of two who drives for Uber and Lyft for 100 hours a week. I believe it’s time drivers get paid as if they are.

This article by Michelle Rodino-Colocino first appeared in 2019 in The Conversation via Creative Commons License.