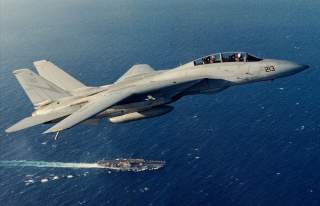 The F-14’s engines are quite far apart, thus requiring a significant rudder input (almost full) to maintain balanced flight with an engine failure.

The F-14 Tomcat was a powerful, complex, and demanding aircraft to fly, and those terms applied during all phases of flight. When launching from an aircraft carrier, for example, it was very difficult to perfectly align the aircraft with the catapult track for the cat shot. Flight deck personnel and aircrews worked together to accomplish this task routinely, always under time constraints to maintain proficiency that could be critical during combat ops – an amazing feat of skill and teamwork. In the rare event of a problem, the results could be catastrophic. I learned this the hard way during my first deployment.

This happened on Sep. 30, 1983. I was a first-tour Tomcat pilot flying F-14As with the Fighting Renegades of VF-24, and we were in the second month of deployment aboard USS Ranger. We’d just pulled out of the Philippines and were steaming in the South China Seapast Vietnam. I was scheduled for a mid-afternoon launch. Sure it would be a boring flight to practice radar intercepts on another F-14 from our squadron, but that was part of the deal … maintaining currency. And “boring” was a relative term: I was flying Tomcats from an aircraft carrier! Besides, it was a gorgeous day.

Brief, pre-flight, and man-up were routine. I was flying with my regular RIO, Lieutenant Dave “Bio” Baranek, who was on his second deployment with the Renegades. We worked well together. We went through the takeoff checklist as I taxied into position and hooked up to the catapult. On direction from the flight deck, I went to MIL power, performed a control wipeout, and focused my eyes on the Shooter. All of my senses and neurons were primed for the upcoming event. On signal I selected Zone 5 (full afterburner). Our jet rumbled with the increased power. The Shooter visually cleared the catapult track and swept his body forward in the signal to launch. A second later the catapult fired.

When the shuttle accelerated forward, the Tomcat usually oscillated just slightly as it aligned with the shuttle path down the flight deck. On this particular occasion that jolt was enough to cause the faulty tower shaft that mechanically drives the fuel control input to shear in the Pratt and Whitney TF30 engine on our left side.

Once a pilot salutes the catapult officer that you are ready for launch, there is not a whole lot to do during the catapult stroke. I usually just fixated on my vertical tape engine instruments. As the left engine failed and I saw the RPM tape drop to zero, I applied full right rudder. The F-14’s engines are quite far apart, thus requiring a significant rudder input (almost full) to maintain balanced flight with an engine failure.

When we left the flight deck, the aircraft noticeably settled with a very slight yaw to the right. Given the settle and the yaw, Bio started to ask what happened. Fortunately we were hot mic so I interrupted him and replied, “We lost the left engine. I’ve got it.”

The tower advised us that our left afterburner had blown out, which was what it looked like to them. Bio informed them that the left engine had failed, and we were now single engine.

As I quickly found out, the F-14A could fly single-engine, even with full fuel and a typical loadout. Our aircraft was configured with one AIM-54A Phoenix, two AIM-7F Sparrows, and two AIM-9L Sidewinders, along with the two Phoenix rails and two fuselage mounted drop tanks that we always carried on deployment. As we came off the deck, the settle wasn’t bad. I didn’t even consider jettisoning everything. The greater concern, as all Tomcat crews could tell you, was the 9-foot distance between engine centerlines. We had all seen the mishap video of a cat shot where the pilot didn’t keep the nose down and the aircraft rolled. Two fatalities. It got the attention of the community and resulted in revised single-engine takeoff procedures. I guess that’s why I focused on the engine tapes. I was ready when it happened to me.

We cleaned up the aircraft and were joined by our wingman. We went through the engine fail procedures and set up for an engine start attempt as we accelerated to 320 KIAS. We had no luck with the normal air start and tried a cross bleed air start using the bleed air pressure from the operable right engine to rotate the starter for the left engine. This was also ineffective.

As part of engine failure procedures, I began to address my fuel distribution situation by selecting the fuel system to feed the good engine (right side) from the inoperative left engine side via use of the fuel feed switch. This function worked normally as I saw my left side fuel quantity decreasing. The next step would involve dumping fuel from our present 19,000 to about 5,000 pounds to reach maximum weight for a trap, known as “max trap.” The Ranger advised us that in view of our emergency they would recover our plane as soon as we were ready, rather than make us wait for the normal cycle of roughly two hours. We expected to dump fuel and be on deck in 20 minutes or sooner.

The F-14 used a system of left and right side fuel tanks that led to left and right feed tanks, which provided fuel to each engine respectively. A feed tank interconnect valve allowed side to side fuel balancing and access to fuel from the opposite side in the event of an engine failure. The fuel was transported around the aircraft by a series of “motive flow” pumps, powered by pressurized fuel that transferred fuel located in each system of internal fuel tanks. This concept of using fuel from the engine driven fuel pumps to power transfer pumps around the aircraft was unique and had just recently played a major part in an accident where a single-engine Tomcat crashed three miles behind the aircraft carrier during a night approach. That F-14 became starved of fuel when the tanks on the operating engine side went empty after the left to right feed tank interconnect failed to open, thus stranding fuel on the inoperative-engine side of the fuel system. That aircraft’s motive flow pumps took fuel from the operating-engine side of the F-14 in a failed attempt to transfer fuel from the opposite, inoperative-engine side of the fuel system. As with all mishaps, we discussed this one and used it as an incentive to review the entire fuel system.

My fuel management situation became more critical, though, when I began fuel dumping to reduce gross weight to max trap. Fuel was dumping only from our operative, right side set of tanks and the right feed tank that directly feeds the right engine was no longer showing full. It was slowly decreasing from 1200 pounds to 1000 pounds and lower. I terminated fuel dumping and saw that we were burning some gas from the inop left side while our right engine feed tank was hovering around 2/3 full at 800 pounds of fuel. With all of our tanks and tubes, it was the right feed tank that kept our good engine running. 800 pounds would last about ten minutes at a conservative fuel setting. It became clear that I would have to carefully manage my fuel distribution and weight by conducting a short series of fuel dumps followed by periods of burning fuel from the inoperative engine side.

Bio and I spoke at length with our squadron representative and our Commanding Officer, who were now in the control tower assisting us by radio. With our onboard fuel keeping us above max trap, it was apparent that we would not be able to recover aboard the aircraft carrier any time soon. The Ranger was headed towards the North Arabian Sea as a response to the Ayatollah Khomeini’s threat to mine the Straits of Hormuz and cause a huge spike in world oil prices. We were off the coast of Vietnam and shipboard flight operations were referred to as “Blue Water Ops,” which meant that although landing fields might be available at nearby countries, the ship was the intended point of landing except in the most extreme cases such as arresting hook separation or other highly unusual calamity. Being single engine did not qualify for a divert to a foreign field; the ship as a self-contained unit of the carrier battle group would handle its own problems, not leave broken planes scattered in its wake.

As the process of short dumps and burning fuel from the right side of the plane continued, the right feed tank slowly diminished to around 600 pounds of fuel. When we had practiced single engine procedures and approaches in the simulator, the operating engine side feed tank always stayed full. With my current predicament I was worried that in the case of a wave off or bolter (skipped arresting wire) we would need afterburner to accelerate and climb even with the gear up. With a burn rate of 1000 pounds per minute in afterburner (each engine), this did not allow for much error as the operating, right side feed tank sank to 500 pounds. Despite being above max trap due to remaining fuel, Bio and I decided to head towards the ship for an overweight landing. Bio later told me that he “figured they built in a fudge factor” when they established the weight limit. The ship would accelerate to make additional wind over the deck to compensate for our increased approach speed.