What It's Like to Fly the U.S. Military's Most Heavily Armed Attack Helicopter 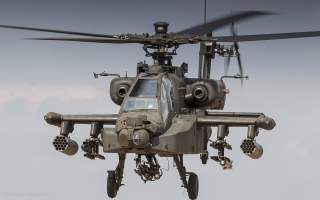 While this Patrick Stewart quote may be from an R-rated movie about a talking teddy bear, it's remarkably accurate. After all, the old warhorse has been kicking *** since it was first adopted by the U.S. Army in the 1980s. Designed to get into trouble fast and put it down even faster, the AH-64 Apache usually comes bristling with ordnance, from an M230 chain gun firing 30mm rounds to Hellfire missiles and rockets.

Most guys who join the military are not in it for the money, they're there to blow **** up. And if you can fly around and blow things up, as a kid who played army, it doesn't get much cooler than than that. In reality, there's nothing cooler than being able to respond to a request for fire, or to help the guys on the ground.

Flying during the day when the air conditioning breaks. That cockpit turns into a ******* sauna like no other. I'm talking canopy greenhouse that will get to about 138 degrees, and that's where all your electronics start to fail. You cannot escape the heat. You can't open your windows, so it gets ungodly hot.

TM: Man, it's like sex. I have the hairs on my arms pricked up just thinking about it, and if it's not too weird to say, I have a bit of a freedom boner.

There's nothing much better if you're into guns and into flying, and get to combine the two...There's a whole level of complexity involved. You're not just dealing with shooting and terminal ballistics, you're dealing with aerial ballistics. There's math and it's complicated: projectile shift, trajectory jump, all these things come into play. Shooting the 30 mm is pretty cool. The hellfire is totally anticlimactic. I thought there'd be a huge ball of fire, but it's just like pffffft.

TM: [Laughs] Yeah. Okay, so this is something my platoon did, and keep in mind we had no females in our unit at this time, and we got bored. We had high high energy, lots of craziness going on, and then the rules of engagement changed… So we'd go to the desert and fly around if there was nothing we needed to prosecute as a target, we'd go through the salt fields on the way back. And the tradition is that whoever is the worst shot with the rocket — and keep in mind that the rocket is the only one you need skill to shoot — whoever is the furthest from the target, when you land, you had to drop your pants and walk back through the flightline with your genitals hidden behind you, yelling "I'm a pretty pretty princess."

That's the ****** up humor that military guys use to pass the time. It's not the right answer, and it's not condoned, but you've gotta balance between professionalism and morale. And what people don't understand is that we deal with tragedy with dark humor.

Right, but you always get that one guy who doesn't get practical jokes. Like you take someone's beret, put it in water, and put it in the freezer so they'd have to chisel it out. And you're like "yeah, that's funny."

No, you just destroyed my ****. You don't get how practical jokes work.