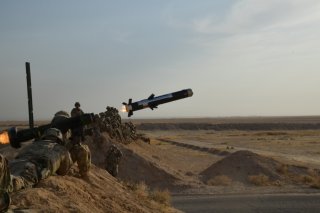 On February 8, the Pentagon announced U.S. forces in Syria are no longer guarding oil fields, they are instead focused on fighting the remnants of the Islamic State. A defense official said the 900 U.S. military personnel and contractors on the ground in Syria have disengaged working with private companies to develop oil resources since the U.S. “mission there remains to enable the enduring defeat of ISIS.”

This announcement highlights the shift in U.S. Middle East policy the Biden administration has begun to carry out in Syria. In an interview on February 8, U.S. Secretary of State Antony Blinken would not endorse the Trump administration’s recognition of the Golan Heights as part of Israel. Blinken explained that the Biden administration “would look at” the control of the Golan “if the situation were to change in Syria.” The secretary added that Iranian-backed militias on the ground who are partnered with Syrian President Bashar al-Assad’s government “pose a significant threat to Israel.”

In 2019, the United States became the first country, after Israel, to officially recognize the Jewish state’s sovereignty over Golan Heights. Israel captured the region from Syria in the 1967 Six-Day War, later annexing it in 1981, a move not recognized internationally. When Syria controlled the region, regular artillery attacks ambushed neighborhoods in Northern Israel. The Golan’s location, around 40 miles south of Syria’s capital, is strategically essential to Israel’s security efforts. In addition to utilizing the Golan area as a buffer zone separating Israeli’s northern neighborhoods from Syria’s instability, it also serves as a deterrent to Iranian encroachment.

Iran, a friend of Bashar al-Assad’s government, has tried to use its Syrian neighbor as a launch-pad for attacks across the border into Israel. The Iranian Revolutionary Guards Corps-Quds Force (IRGC-QF) uses militias across the Middle East as a way to achieve regional hegemony. Iran’s expanding presence in Syria parallels its efforts in Lebanon, Iraq, Yemen, and Afghanistan to gain a greater foothold in the region. Since 2013, Iranian forces have tied themselves to private security companies in Syria in an effort to expand their influence in the country. Iran has used monetary compensation and religious affiliations to attract Syrian youths to join their militias.

The Israeli Defense Forces (IDF) have launched dozens of airstrikes in Syria over the years to prevent Iran from establishing a permanent military presence on the ground there. In 2017, Israel bombed a military site in Syria that was holding chemical weapons and Iranian precision bombs. Israeli officials claimed that Iranian facilities in Syria that produce weapons are intended to be used against the Jewish state, which would not be tolerated. Since the onset of 2020, Israel has increased its targeted attacks in Syria, including an airstrike this week that bombed fifteen sites near the border crossing to Iraq. Israel’s targeted missions in Syria have been successful in preventing Iranian forces from getting too close to its borders.

As nuclear talks between the United States and Iran are expected to resume, Tehran and its proxies are unlikely to respond to an influx of Israeli airstrikes in Syria. The IDF could be taking advantage of the unlikelihood of a response from Iran at the moment, but they are also reminding the Biden administration that a renewed U.S.-Iran deal would have the most significant ramifications for Israel.