What Kissinger Gets Right on the Russo-Ukrainian War 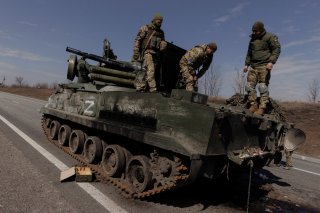 Returning to status quo ante is an ideal solution to end the war. A buffer Ukraine with a strong military can sustain its freedom in the future.

Last week in the World Economic Forum in Davos, former U.S. national security advisor and secretary of state Henry Kissinger suggested a controversial solution for bringing an end to the ongoing war in Ukraine. President Volodymyr Zelenskyy of Ukraine even went that far to compare Kissinger’s proposal to Neville Chamberlain’s infamous appeasement of Adolf Hitler in Munich in 1938.

Kissinger’s argument is that a peace deal that separates two sides of the conflict along the line of pre-2022 invasion should be negotiated. According to this proposal, Crimea and eastern parts of the Donbas region that Russia seized in 2014 would remain under Russian control. Kissinger called this solution “just and possible to define.” Pursuing the war beyond that point, added Kissinger, would not be about “the freedom of Ukraine,” but “a new war against Russia itself.”

Trained in the school of Metternich and Bismarck, Kissinger has understood the limits of Wilsonianism. Announced at a time when the world was coming out of the ashes of the World War I, during which several major empires collapsed, Wilsonianism held that supporting the self-determination of smaller nations would promote the cause of freedom and democracy and serve American interests. But for Kissinger, as a prominent scholar and practitioner of realpolitik, power is the main subject matter of international politics. Hence, under certain conditions, the main successor state of a collapsed empire has the right to seek absorbing its co-nationals across the border. Kissinger followed this logic in the 1974 Turkish invasion of Cyprus and has been advocating this view for Ukraine. “There is no American reason why the Turks should not have one-third of Cyprus,” said Kissinger to President Gerald Ford at the time. Akin to the status of Cyprus in 1974 that had a considerable Turkish population, eastern Donbas and Crimea also had a large Russian population in 2014.

The reality of the war on the ground is that pushing Russians out of eastern Donbas and especially Crimea is extremely difficult. Besides Russia’s sophisticated military bases in Crimea that makes the capturing of the peninsula very unlikely, there is also a sense of local support for Russian forces in these regions that will further impede Ukraine’s counter-offensive. Furthermore, this objective will likely require a long amount of time to be achieved, but time is unfortunately against Ukraine. The fight is on Ukraine’s soil rather than Russia’s. And Ukraine’s economy is seriously damaged. Furthermore, there is a growing sense that West’s support for Ukraine may falter in the coming months. All these factors demonstrate that a negotiated settlement along the status quo ante can preserve Ukraine’s interests as well.

A strong Ukraine will likely be able to deter any possible Russian attack in the future. Militarily, Ukraine is in a much stronger position than it was prior to the 2022 invasion. The West should keep providing ample military and economic aid to make sure that Ukraine does retain its military strength. Many Russian nationalists that have long perceived Ukraine as a part of the Russian nation have come to realize that Ukraine is not a fake nation. A fake nation could have not maintained the level of social cohesion and collective action that Ukrainians have exhibited during their resistance against Russia’s invasion. This may temper the Kremlin’s future hawkish impulses.

Kissinger is anything but Chamberlain. His proposal, rooted in pragmatism rather than idealism, is a solution in which neither side will be a total loser. Any continuation of war can have catastrophic ramifications for Ukraine, Russia, and the world, and therefore, needs to be prevented.