What Michael Bloomberg Should’ve Said About His Billions 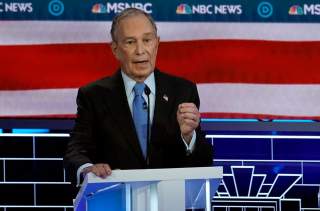 Last year, Sen. Bernie Sanders tweeted, “Billionaires should not exist.” So Michael Bloomberg should have been primed and ready when moderator Chuck Todd of NBC put the question to him at the Democratic presidential debate in Las Vegas, “Mayor Bloomberg, should you exist?” Todd’s query brought this response: “I can’t speak for all billionaires. All I know is I’ve been very lucky, made a lot of money, and I’m giving it all away to make this country better. And a good chunk of it goes to the Democratic Party, as well.”

Two things: First, Bloomberg’s response was factual. So it had that going for it, I guess. Second, much of the crowd was predisposed toward disliking the billionaire because he was a billionaire. It’s not just socialist Sanders. The whole party is gripped by an inequality panic where any billionaire anywhere represents a public policy failure. So a tough room filled with “OK billionaire” attitude.

That said, not a compelling response. It’s as if Bloomberg deeply understands capitalism but can’t explain it, while Sanders has no idea how socialism works but explains it great. A better defense by Bloomberg was certainly possible, especially given the certainty that one would be needed.

And assembling one isn’t really that hard. No, Bloomberg’s story isn’t exactly Dickens or Horatio Alger: Brookline to Harvard to Salomon Brothers. But Bloomberg also didn’t inherit his billions or gain them through a dodgy privatization scheme like some Russian oil oligarch. He was lucky and clever. Lucky that Salomon was bought out, and he walked with $10 million useful for startup seed money. And clever in that he a) identified an opportunity where Wall Street would pay for high-quality info and analytics and b) had already designed a digital financial system for Salomon. Then, snip snap, Bloomberg spent the next four decades — including a pause as New York City’s mayor — building out a company with 20,000 well-paid workers that generates some $10 billion in annual revenue. Overnight ultrabillionaire success.

So a pretty good entrepreneurial story to tell. Maybe not son-of-immigrants, middle-class-garage-tinkerer-to-Silicon-Valley-tech-titan good — but pretty good. America should be happy when its people start innovative companies that become wildly successful by providing highly valued goods and services. Even if those people become billionaires in the process. The rise of the superrich, a 2018 Credit Suisse global wealth report notes, “is often seen as a sign of a country’s economic health and its ability to generate opportunities for wealth creation.”

If the $21 trillion US economy weren’t capable of generating billionaires, now that would be a problem. For all of us. First, countries with lots of billionaires per capita also tend to have high levels of well-being and competitiveness. Second, as Nobel laureate economist William Nordhaus has written, “only a miniscule fraction of the social returns from technological advances” accrue to innovators. At least over the second half of the 20th century, “most of the benefits of technological change are passed on to consumers,” he concluded. And by “most,” he means almost all. Innovators are “able to capture about 2.2 percent of the total social surplus from innovation.” The rest goes to us. An entrepreneur and innovator worth billions might have generated societal value worth trillions. Now, to boil that all down into a 90-second answer …