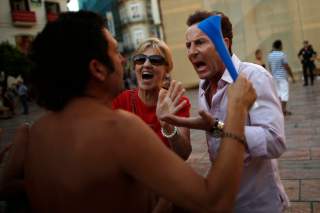 Even the most secular people and societies usually have their behaviour shaped by religion. We can see its influence in behavioural codes that set out what is considered right and wrong. But we can also see it in more general attitudes to authority, sexuality and what to do with the people who don’t follow these codes.

Today, even apparently socially liberal people will co-opt the traditional tools of power used by religion to shame and exclude those whose behaviour they disapprove of. While the targets may have changed, the underlying rationales and approaches are remarkably similar. Understanding how religion – and its echoes in secular belief systems – motivates people to behave in certain ways is increasingly important in a culture in which people often have multiple, changing identities.

The question of what actually drives people to behave in a religious way has vexed philosophers for millennia. For many with religious beliefs, the fear of a god (or gods) and their wrath appears enough to keep them on the straight and narrow. Likewise, sin (a transgression against a divine law) or fear of sin, drives certain behaviour.

These forms of religious scrupulosity – fear of God and fear of sin – are influenced by an enormous range of societal and psychological factors. But our recent behavioural research highlights a very important and basic motivator that may lie beneath both these fears: the emotion of disgust.

Disgust is perhaps most often associated with foul-tasting foods and other substances or people that might spread disease. At the heart of the experience of disgust is a process of protection. We evolved the emotion of disgust because it can protect us from things that could harm us, such as germ-carrying substances.

The facial display of disgust, which often involves tightening the upper lip and wrinkling the nose, creates a physical barrier that prevents the intake of potential contaminants. The gag response that we feel when we ingest rotten foods or think about eating disgusting things is a preparatory response to make it easier to expel potentially harmful microbes.

Disgust in response to certain behaviours doesn’t protect you from germs, but it can prevent a psychological form of contamination. Eating a blended cockroach or sleeping in a bed in which someone died the night before are unlikely to physically harm you, but they could make you feel somehow violated, like you have ingested or touched something that you simply shouldn’t have.

This form of disgust doesn’t protect you physically, but it does protect you from psychological harm. This kind of moral sensitivity is an important moderator of our behaviour. In fact, disgust sensitivity can also affect reactions to the behaviours of other people. We can feel disgusted when people break our moral codes, including by pursuing sexual practices we disapprove of.

Fear of God, fear of sin

Our research shows that disgust-based sensitivity may play an important role in motivating specific religious behaviour. We found that religious scrupulosity may be driven by sensitivity to disgust, particularly strong feelings of disgust for germs and sexual practices but, paradoxically, not for general immorality.

We conducted two online studies. The first involved 523 adult undergraduate psychology students at a large southern American university and examined the relationship between disgust and religious scrupulosity. This study showed that people who felt a particular disgust towards germs were more likely to express a fear of God. And those with disgust towards sexual practices were more likely to fear sin.

These results suggested there is a link between disgust sensitivities and religious thoughts and feelings, but didn’t explain how they are related. Disgust may influence the development of religious scrupulosity or vice versa, or it may be some combination of the two.

To probe this issue further, we carried out a second study with 165 participants. This experiment involved making some respondents feel disgusted by showing them unpleasant images related to germs (vomit, faeces, and open sores).

We compared their fear of God and fear of sin to that of other participants who were not made to feel disgusted (they saw a chair, a mushroom and a tree). Participants who saw the germ-related images expressed feeling dramatically more disgust and reported more extreme levels of religious scrupulosity in terms of fear of sin, but not fear of God.

These studies are among the first to suggest that the basic emotion of disgust may drive religious thoughts and feelings. Our findings suggest basic emotional processes that exist separate from religious doctrine and largely outside conscious control may underlie some fundamental faith-based beliefs and behaviours.

Although our research breaks new ground, more is clearly needed to further explore and clarify the effects of disgust on religious fundamentalism and the threats it poses to the average individual and to society.