What North Korea Would Do if Trump Attacked: A Rocket Artillery Strike? 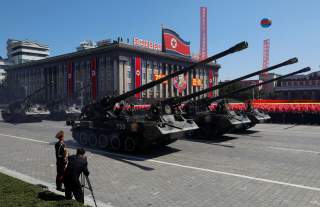 Moreover, ballistic missiles could strike U.S. military positions beyond the Korean Peninsula, specifically in Japan. Whatever the targets, Pyongyang's existing ballistic missile stockpile could easily deliver approximately 1 kiloton (1,000 metric tons) of high explosives, as well as other nonconventional munitions — chemical, biological or even nuclear. Because of the inaccuracy of different North Korean missile systems, these strikes would most appropriately be used against urban centers or other wide-area targets. If employed against specific military facilities at longer ranges, a significant amount of misses would occur.

As with conventional artillery, North Korea will also be forced to show restraint in the use of these systems. Survivability may be less of a challenge because of the predominance of mobile launcher systems, but unlike conventional artillery munitions, ballistic stockpiles are limited — as is the ability to replenish them, which would draw on significant resources. Every missile spent by North Korea in an immediate retaliation scenario will diminish the leverage it maintains immediately after the retaliation. Furthermore, the high potential for failed launches, as demonstrated by frequent unsuccessful missile tests across a variety of platforms, could further damage Pyongyang's ability to influence through its ballistic missile stockpile.

The most significant threat from North Korea's ballistic missile stockpile is the potential for a nuclear strike. Some estimates indicate North Korea may have between two and five nuclear warheads at its disposal already, at least some of which could be made to fit on a Nodong missile. Even a single nuclear strike against a South Korean population center would result in catastrophic shock and incur an immense cost. Though a nuclear strike would not automatically guarantee Seoul's capitulation, South Korea and the United States factor the possibility of such a strike heavily into their considerations of a strike on the North's nuclear program.

This is the fourth installment of a five-part series that originally ran in May 2016 examining the measures that could be taken to inhibit North Korea's nuclear weapons program. The purpose of this series is not to consider political rhetoric or noninvasive means of coercion, such as sanctions. Rather, we are exploring the military options, however remote, that are open to the United States and its allies, and the expected response from Pyongyang. Part five can be found here.​

In the final installment of this series, we will explore other, unconventional retaliatory options open to North Korea and conclude with an assessment of the likelihood and severity of military action against Pyongyang.

Part 3: What the U.S. Would Use to Strike North Korea

Part 4: How North Korea Would Retaliate

Part 5: The Cost of Intervention

How North Korea Would Retaliate is republished with the permission of Stratfor Worldview, a geopolitical intelligence and advisory firm. This piece was originally featured in January 2001 and is being republished due to reader's interest.