What Sort of Revolution Does Bernie Sanders Want? 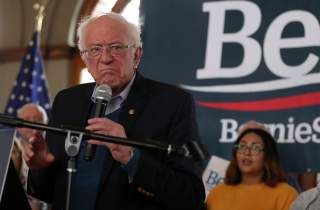 Bernie Sanders is currently leading the pack of Democratic presidential hopefuls in fundraising; he is rising in the polls while his main left compatriot Elizabeth Warren’s support is sliding. Some pundits recently stated that one should not consider it impossible that Sanders will be our next president. (Unfortunately these mavens do not take bets.)

Surely, he is a leading Democratic candidate. Hence, the time has come to ask the Senator from Vermont to clarify a key concept of his campaign—his repeated, insistent call for a “political revolution.”

A revolution is commonly defined as ‘a forcible overthrow of a government or social order, in favor of a new system.’ One should note that revolutions are very rare-- and that when they do take place, they involve a great deal of killing and most times end up establishing a tyrannical regime. This was the case after the French, Soviet, and Cuban revolutions, the main historical revolutions. (The American Revolution was actually a war of national liberation.)

One assumes that Sanders does not envision this kind of revolution; Sanders supporters will point out that he always refers to a “political revolution.” A political revolution is defined as ‘an upheaval in which the government is replaced, or the form of government altered, but in which property relations are predominantly left intact,’ in contrast to social revolutions, in which property relations are also changed. In short, adding the political prefix hardly helps to clarify what Sanders has in mind. Furthermore, the transformation he is looking for surely includes changing property rights, which suggests that he is actually talking about a social revolution. This is not an academic quibble about definitions; it is a question about what the meaning of the key theme of Sanders’s campaign, about the way we are going to get all the wonders he promises to deliver.

Sanders has stated that the political revolution he seeks “is not utopian. This is what we can accomplish and which already exists in a number of other countries.” It would help if he named these countries, but they cannot be found in his stump speech, the transcript of his 90-minute-long interview with the New York Times editorial board, or his webpage. A Trump supporter will say that the answer can be found in Sanders’s praise for the leftist, authoritarian regimes in Venezuela, Bolivia, China, Nicaragua, and Cuba. Indeed, Sander’s often points out that China has done more to address extreme poverty “than any country in the history of civilization.” He has praised Cuba for “making enormous progress in improving the lives of poor and working people.” Sanders stated that “Vermont could set an example to the rest of the nation similar to the type of example Nicaragua is setting for the rest of Latin America” and “It’s funny, sometimes American journalists talk about how bad a country is, that people are lining up for food. That is a good thing! In other countries people don’t line up for food: the rich get the food and the poor starve to death.”

However, no serious observer will claim that Sanders is calling for such a regime for the U.S. While Sanders has heaped praise of these countries, he often adds a hedge. For example, in his December interview with the Times editorial board, he said:

On the other hand, China is a dictatorship. It does not tolerate democracy, i.e., what they’re doing in Hong Kong. They do not tolerate independent trade unions and the Communist Party rules with a pretty iron fist. So, and by the way, in recent years, Xi has made the situation even worse. So, I mean, I’ll give, you give people credit where it is due. But you have to maintain values of democracy and human rights and certainly that does not exist in China.

In the same interview, he commented that ousted Bolivian President Evo Morales had “a pretty good record,” noting his success in fighting extreme poverty and giving voice to indigenous people. He qualified his compliments by saying, “Should he have run for another term although they made it legal? Probably not”.

One may suggest that Sanders has in mind the social democracies of Scandinavia. However, these regimes were forged not through revolutions, but through the kinds of reforms centrist Democrats favor. In short, it is quite easy to figure out what Sanders could not possibly mean when he keeps calling for a revolution; it is much more difficult to figure out what he does mean.

Sanders keeps calling on people to “stand up and fight.” “There will never be any real change in this country unless there is a political revolution. That means that millions of people have got to stand up and fight.” “We need millions of people[,] working class people whose lives have been decimated for the last 45 years[,] to stand up to Wall Street, to stand up to insurance companies and the drug companies.” Again, one is at a loss as to what he means. Revolutions are forged in the streets, on the barricades, over forceful control of the centers of power and media. There is no hint that Sanders calls on his followers to fight in that way; he mainly ask them to send checks often and for vote him--- which is what all the other candidates also call for. It seems that Sanders’s fighting words have no fighting in them.

Finally, one notes that even if Sanders gains power, the old fashioned way, by gaining a majority of the votes in the electoral college, and somehow also gets the Democrats to gain majority in the Senate and maintain their majority in the House, he still will be unable to pass he radical agenda any more than Obama was able to pass much more moderate policies-- when he had such majorities. The Democratic Senators from red stats will not support radical changes.

Amitai Etzioni is a University Professor and professor of international affairs at The George Washington University. Click here to watch a recent, four-minute video called “Political and Social Life after Trump.” His latest book, Reclaiming Patriotism, was published by University of Virginia Press in 2019 and is available for download without charge.