What a Submarine Looks Like After Smashing Into an Underwater Mountain 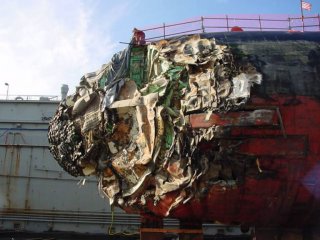 While service on board a Navy submarine remains a potentially hazardous occupation, the United States Navy has maintained an exemplary safety record when it comes to its undersea fleet.

Indeed, the U.S. Navy has not lost a submarine at sea in over five decades. Fatal accidents have taken place, however, including in 2005 when the Los Angeles-class fast-attack submarine USS San Francisco collided with an undersea mountain. Even so, that incident revealed the extent to which the Navy had learned from previous mistakes and how it had applied those lessons to its submarine fleet.

How the Past Impacts the Future

While the U.S. Navy’s submarines have not been immune from accidents or mishaps – such as in 1988 when a fire broke out on board the USS Bonefish submarine – the service has more or less maintained a positive safety record. The Navy’s most tragic submarine incident – which remains the last time that the Navy lost a submarine at sea – occurred in 1963 when the USS Thresher along with all 129 people on board was lost off the coast of Cape Cod while conducting dive tests.

In the aftermath of the Thresher’s sinking, the Navy established the SUBSAFE program, which ensures proper design, manufacture, and maintenance of the Navy’s nuclear-powered submarines to guarantee their safety. Decades later, this decision would pay off and help to avoid another tragic accident involving a Navy submarine.

In 2005, the Los Angeles-class submarine USS San Francisco collided with an undersea mountain while sailing at full speed. In order to maintain stealth, the San Francisco had not been operating its active sonar and was traveling too fast to make effective use of its passive sonar. The crew, meanwhile, were not utilizing the most up-to-date undersea navigation charts, and the outdated charts they were using did not indicate the presence of the mountain formation.

When the vessel rammed into the mountain, the collision injured just about the entire crew – some of them quite severely – and took the life of one sailor on board. The crew was able to rescue the situation from becoming a true calamity, however, and one of the sailors was able to flip the switch that causes the submarine to carry out an emergency surfacing despite having two broken arms. The crew was then able to improvise enough to get the submarine moving, and the vessel eventually arrived safely in Guam.

While the death of a Navy sailor is of course a tragic event, the collision could have been much worse. That the incident only resulted in a single death was largely thanks to the Navy’s SUBSAFE program. The elaborate system of checks in the design, construction, and maintenance of submarines implemented as part of the system are designed to ensure that undersea vessels are able to surface in the event of an emergency, and this helped to give San Francisco and her crew the chance they needed to avoid what might otherwise have been the total loss of the vessel and everybody on board.