What the Sudan Coup Means for the Future of U.S.-China Power Plays in Africa 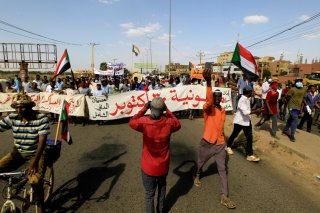 Conflict resolution following a military-led coup in Sudan might be one of the final American-led dispute mediations in Africa.

Last week, after an apparent military coup in Sudan, civilians engaged in pro-democratic protests and were tear-gassed and shot with live rounds by Sudanese security forces. At least fifteen protesters were killed. In response to the unrest, many western countries stripped Sudan of foreign aid, including the United States, which withdrew $700 million in foreign assistance. After a few days of economic pressure, Sudan’s coup leader agreed to the restoration of a  civilian-led government.

Leveraging aid to encourage conflict resolution has certainly served the United States well in the past as an effective peacebuilding mechanism, if Sudan is any indicator, this tactic may not work so well in the future.

China, Sudan’s largest trading partner, did not condemn the military takeover. China’s indifference to or tacit approval of the coup lessened the blow of any economic ramifications imposed by the West on Sudan and complicated American peacebuilding efforts.

While the United States still maintains some semblance of influence in the region, the slow pace of conflict resolution in Sudan foreshadows an inevitable change. It seems likely China will become a more proactive force in Africa and a more dominant influence. To combat this development, the United States will need to adjust its strategy in Africa.

The inclusion of Sudan in the Belt and Road Initiative (BRI), China’s economic investment strategy aimed at integrating multinational trade with China, has entwined Sudanese economic success with Chinese economic might. Consistent with other major recipients of BRI investments, China has eclipsed other countries as Sudan's primary trading partner. Sudan owes China an estimated $6.4 billion as a result of BRI investments.

Sudan has been enthusiastic about taking China’s assistance, heavily integrating its long-term development plans with BRI initiatives. In turn, Sudan plays a role within China’s broader objective of extending its sphere of influence outside of Asia. China’s interest in Sudan lies primarily around the significant natural resource and energy mining potential of the African nation, which is reflected in the Chinese cultivation of a stronger Sudanese oil and agriculture industry.  China has also pledged to support Sudan through expensive infrastructure projects, including a new international airport in Khartoum and access to satellite navigation via China’s Beidou GPS system.

American investments in Sudan are minor compared to China’s. While the United States is Sudan’s largest international humanitarian aid donor, China has injected significantly more capital in the region via BRI than its American counterpart.

Discrepancies in American and Chinese condemnation of the unrest in Sudan exemplify differences in peacekeeping interests between the United States and China. The United States tends to be vocal in times of civil unrest while China is traditionally non-interventionist when involved in the political affairs of countries outside of the Sinosphere. China has been known to make exceptions when political involvement could secure new bilateral ties—for example, take China’s preemptive meetings with the Taliban.  In essence, while the United States uses aid as a major incentive for warring factions to comply with peacekeeping norms, China remains pragmatic. China may intervene verbally, but it’s careful not to jeopardize its assets.

A lack of shared, peacekeeping resolve among China and the United States lessens the effectiveness of any one nation’s ability to promote stability. If a nation’s largest financier makes no effort to repair peace in times of civil unrest, then smaller players in the international system have little economic leverage to successfully effectuate peace. It’s only by banding together that these smaller players stand a chance at exerting enough pressure to effect change. That’s how the United States was able to persuade Sudan’s military junta to allow civilian representation in the new government.

However, the quelling of the Sudan coup showcases that America’s position as a peace broker is fragile at best in states heavily indebted to BRI, as the size of Chinese investments make China the dominant player over the United States in the region. Future peacekeeping efforts in Africa could be hampered if U.S.-China interests conflict and China begins leveraging its BRI investments to curry political favor and erode American political legitimacy.

As the United States seeks more active involvement in Africa, it would be rational for China to leverage its economic prowess to sway political issues in BRI recipient countries in support of China’s financial objectives. Under this increasingly feasible scenario, if the United States is ill-equipped to challenge the scale of BRI investments, it should shift towards leveraging allies in Africa and the Middle East as the drivers of conflict resolution or solidify a diplomatic strategy with China to protect humanitarian interests in regions prone to political instability.

American policymakers should view the resolution in Sudan as a reality check. The restoration of a Sudanese civilian-led government was due to multinational economic pressure, diplomatic measures, and the continuation of Chinese political pacifism, not American power.