What Tracking 300,000 Trees Around the World Tells Us 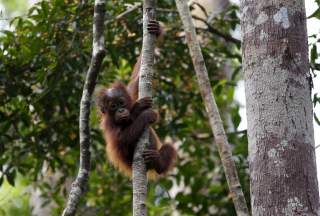 Tropical forests matter to each and every one of us. They suck colossal quantities of carbon out of the atmosphere, providing a crucial brake on the rate of climate change. Yet, new research we have just published in Nature shows that intact tropical forests are removing far less carbon dioxide than they used to.

How did we reach such an alarming conclusion, and how is it that nobody knew this before? The answer is that we – along with 181 other scientists from 36 countries – have spent years tracking individual trees deep in the world’s rainforests.

The idea is simple enough: we go and identify the tree species and measure the diameter and height of every individual tree in an area of forest. Then a few years later we return to exactly the same forest and re-measure all the trees again. We can see which grew, which died and if any new trees have grown.

These measurements allow us to calculate how much carbon is stored in a forest, and how it changes over time. By repeating the measurements enough times and in enough places, we can reveal long-term trends in carbon uptake.

Most of the world’s primary tropical rainforests are found in the Amazon, Central Africa or Southeast Asia. Hansen/UMD/Google/USGS/NASA, CC BY-SA

This is easier said than done. Tracking trees in tropical forests is challenging, particularly in equatorial Africa, home to the second largest expanse of tropical forest in the world. As we want to monitor forests that are not logged or affected by fire, we need to travel down the last road, to the last village, and last path, before we even start our measurements.

First we need partnerships with local experts who know the trees and often have older measurements that we can build upon. Then we need permits from governments, plus agreements with local villagers to enter their forests, and their help as guides. Measuring trees, even in the most remote location, is a team task.

The work can be arduous. We have spent a week in a dugout canoe to reach the plots in Salonga National Park in central Democratic Republic of the Congo, carried everything for a month-long expedition through swamps to reach plots in Nouabalé Ndoki National Park in the Republic of Congo, and ventured into Liberia’s last forests once the civil war ended. We’ve dodged elephants, gorillas and large snakes, caught scary tropical diseases like Congo red fever and narrowly missed an Ebola outbreak.

Days start early to make the most of a day in the field. Up at first light, out of your tent, get the coffee on the open fire. Then after a walk to the plot, we use aluminium nails that don’t hurt the trees to label them with unique numbers, paint to mark exactly where we measure a tree so we can find it next time, and a portable ladder to get above the buttresses of the big trees. Plus a tape measure to get the tree diameters and a laser to zap tree heights.

After sometimes a week of travel, it takes four to five days for a team of five people to measure all 400 to 600 trees above 10 cm diameter in the average hectare of forest (100 metres x 100 metres). For our study, this was done for 565 different patches of forest grouped in two large research networks of forest observations, the African Tropical Rainforest Observatory Network and the Amazon Rainforest Inventory Network.

Managing the data is a major task. It all goes into a website we designed at the University of Leeds, ForestPlots.net, which allows standardisation, whether the measurements come from Cameroon or Colombia.

Many months of detailed analysis and checking of the data followed, as did time for a careful write-up our findings. We needed to focus on the detail of individual trees and plots, while not losing sight of the big picture. It’s a hard balancing act.

One of the authors in Rep. Congo with Noe Madingou of Marien Ngouabi University and other local guides and researchers. Aida Cuní Sanchez, Author provided

The final part of our analysis looked to the future. We used a statistical model and estimates of future environmental change to estimate that by 2030 the African forests’ capacity to remove carbon will decrease by 14%, while Amazonian forests may stop removing carbon dioxide altogether by 2035. Scientists have long feared that one of Earth’s large carbon sinks would switch to become a source. This process has, unfortunately, begun.

The declining carbon sink results provide pretty grim news and not what we would like to report. But as scientists, we have a job is to follow the data wherever it takes us. That can be far into the rainforests of Congo, or onto the TV to tell people about our work. It’s the least we can do in the climate emergency we are currently living though. We will all need to play a role in solving this crisis.