What to Watch List: Risky Russian Tactics in the Arctic Region 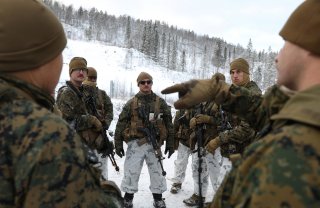 The intercepts are causing a little pause or concern among some, however one senior Air Force leader in charge of operations is not too worried about it on the basis that they are not likely to erupt into combat. Most of all, the message seems to be that U.S. missions will not be interrupted or altered in any way by this kind of Russian behavior.

“We are flying in international airspace, and if Russia wants to come meet us out there, we are not going to fly away. We are going to continue to fly to assure our partners and demonstrate our ability to protect our allies,” Lt. Gen. Joseph Guastella, the Air Force’s deputy chief of staff for operations, told The Mitchell Institute for Aerospace Studies in a video interview.

While he mentioned that most of the intercepts were what he considered low-risk or appropriate behavior, he did indicate that some of the Russian maneuvers were both provocative and inappropriate. The concern with any intercept, of course, is that it introduces the possibility of some kind of major miscalculation or misinterpretation which could lead to an exchange of fire . . . or even war in a worst-case scenario.

At the same time, there are factors here that serve to mitigate risk, one of which simply being sensor range. Virtually all fighter-jet or bomber sensors have been massively upgraded to increase image fidelity, range and a technical capacity to process intelligence information. What this means is that approaching Russian aircraft are likely to be identified or at least seen in some capacity well in advance of them getting close enough to actually provoke. This would be particularly true with platforms such as the F-35 stealth fighter jet, which, of course, has extremely long-range sensors and can locate multiple enemy targets or assets well before it is seen or detected. This circumstance could change, depending upon the pace at which potential adversaries acquire true fifth-generation fighter capability with comparable sensor range.

The Russian intercepts, brought up or introduced during the video interview by Mitchell Institute Dean retired Lt. Gen. David Deptula, are still causing concern and increasingly growing in frequency. This is especially true in places such as the Arctic where several great powers are now seeking greater influence and a stronger operational presence.

The Arctic ice is melting faster than expected, a reality that is opening up new waterways and points of access to the region. This encourages adventurism, tourism, and a fast-unfolding international competition for resources, influence and strategic advantage. Certainly, the geographical positioning of the Arctic makes it quite desirable from a geopolitical strategic point of view. Any major power with a substantial Arctic presence could have nearly immediate tactical reach into otherwise far away continents.