What We Know About the Army's New 'Bullets' 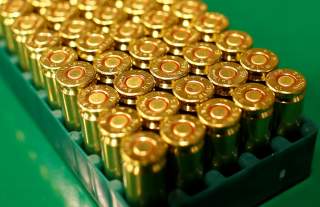 Something we do know about the new 6.8mm army caliber is that the recoil is significantly more than that of the 5.56 (due to the fact that it is a larger bullet), so periods of sustained fire will be more difficult.

You may not have heard, but late last year it was decided that the United States army would be ditching the traditional 5.56x45mm NATO and 7.62x51mm NATO rounds for an entirely new caliber in the form of the 6.8mm.

While we don’t know much about the 6.8mm so far, we do know that it is designed as a compromise between the virtues of both the 5.56 and 7.62 rounds. There are big concerns among Army officials that the 5.56 round will not be strong enough to penetrate the body armor worn by soldiers in the Russian Army.

According to Colonel Geoffrey A. Norman, the Force Development Division Chief at Army Headquarters, the 7.62 has too much mass without enough propellant, while the 5.56 simply does not have the mass to penetrate through the body armor. As a result, it makes sense to switch to a new caliber that both has sufficient propellant and enough mass to break through Russian body armor.

Furthermore, most of the combat overseas in Afghanistan has shifted from dense urban towns to sprawled out open areas in the mountains, where US troops are forced to engage hostile targets at long distances, and where the power of the 5.56 ammunition is drastically reduced.

Something we do know about the new 6.8mm army caliber is that the recoil is significantly more than that of the 5.56 (due to the fact that it is a larger bullet), so periods of sustained fire will be more difficult.

NOTE: the Army-issue 6.8mm will be an entirely new caliber, and will not be the existing 6.8 SPC.

The new 6.8mm ammunition will be made at a manufacturing facility called Lake City Army Ammunition Plant in the state of Missouri. This plant currently produces roughly 90% of all small arms ammunition for the Department of Defense, which comes out to around one and a half billion rounds a year. A new building will be constructed at the facility specifically for the purpose of manufacturing the new ammunition, the first new building at the facility in over half a century.

That’s also not to mention that the Army will be seeing a change in their issued firearms as well. A new infantry carbine and squad support weapon will be designed to replace the existing M4 and M249 SAW platforms. The Army wants both of the new weapons to fire the same 6.8mm ammunition, and also to accept the same magazines. The new carbine is said to share several features with the existing AR-15/M4 platform, but will for the most part be a new weapon.

This summer, several companies will submit prototypes of the new 6.8mm weapons to the army for testing. The army is expecting there to be a more than two year period of development, with production expecting to begin around 2021. The army plans to purchase at least 250,000 new 6.8mm firearms over the next decade after that, which will come out to around $150 million a year.

The new 6.8mm ammunition will have a lot of roles to fill, because it will need to be used as both a close range and long range caliber. It remains unclear as to whether the 6.8mm will be utilized as a sniper’s weapon, but the army has recently adopted an entirely new  long range sniper rifle chambered for 7.62x51mm.

This is not the first time that the United States military has attempted to standardize weapons or ammunition. Following World War II, the military decided to replace the M1 Garand, M1 Carbine, M3 Grease Gun, and BAR light machine gun all with the new M14 rifle, but the results did not go as planned, as the M14 was later largely ditched in favor of the M16 (as well as the M60 and later M249 SAW as light squad support weapons).

As a result, some are understandably wary as to whether the 6.8mm can truly perform every role that it has been called to do, but obviously only time will tell.

How long are we from seeing the 6.8mm become the new standardized round in the United States army? Honestly, we’re probably a ways away. That’s because it’s going to take several years for the army to phase out the existing ammunition for it.

On top of that, we also know that the Marine Corps and the rest of NATO will not be adopting the 6.8mm and will be sticking with the 5.56, so if the 6.8mm is ever going to be mass adopted across the world, it’s going to be a long way off.