What We Know: Russia Is Building a Submarine To Hold "Thermonuclear" Torpedoes 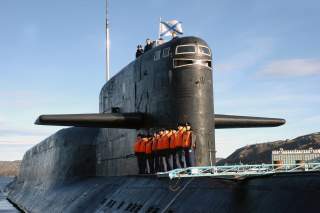 The first submarine to carry Russia’s “Poseidon” thermonuclear torpedoes has been laid down, inching the strategic weapon closer to deployment readiness.

Russian president Vladimir Putin looked on from St. Petersburg via teleconference as the Belgorod nuclear submarine was floated out at Sevmash plant in in the northwestern province of Severodvinsk. “By our shared efforts, we’ve multiplied Russia’s status as a great maritime power. May the ships’ future crews serve well. Seven feet beneath the feet keel,” said the Russian president. The latter phrase is an old Russian nautical blessing, in the same vein as its english “fair winds and following seas” counterpart.

Quoting Russian defense industry sources, the TASS news agency reports that Belgorod will undergo state trials in early 2020 and be transferred to the Russian Navy later that year.  Poseidon’s readiness is an altogether different question, with U.S. intelligence sources alleging that the underwater nuclear drone will enter the Russian armed forces no earlier than 2027.

The Kremlin, citing the “secrecy of the project,” has taken the unusual step of banning even major state media outlets from capturing Belgorod on video. The Russian Navy could perhaps be concerned that potential adversaries will study close-up footage of the unfinished hull to gain insight into Belgorod’s design or Poseidon’s loading/installation mechanisms.

However, the handful of blurry shots that did make it out of the ceremony seem to confirm prior speculation that Belgorod is a specialized Oscar-II variant. Earlier in 2019, it was reported that the several late soviet Oscar-II—also known as Project 949A—vessels were being repurposed to accommodate Poseidon along with the Project 09851 Khabarovsk submarine. Belgorod’s specifications are classified, though the Navy’s ongoing secrecy suggests extensive hull modifications as opposed to merely minor, internal improvements. Little is known about the remaining two submarines slated to carry Poseidon drones, for a total of thirty-two Poseidon units across four vessels.

As previously covered by the National Interest, Poseidon is a nuclear-powered underwater drone armed with a 2-megaton atomic payload. Its explosion is meant to generate a radioactive tsunami, capable of destroying coastal cities and other infrastructure several kilometers inland. There are, to be sure, much faster and more effective means of delivering a nuclear payload—a nuclear ICBM like RS-28 Sarmat would its reach its target a within a fraction of Poseidon’s travel time while dwarfing the former in destructive power.

Poseidon is by no means a replacement to these more conventional weapons, but it diversifies Russia’s nuclear portfolio in key ways. To compare it with a weapon like Sarmat is to miss the point that Poseidon is intended as a completely different tool of force projection. An ICBM is either stationary or flying toward its target; but a Poseidon-armed submarine can linger off an enemy’s coast for weeks, occupying a strategically crucial gray zone between peace and open conflict.

The Russian security establishment believes that the U.S. military currently lacks the capacity to reliably intercept Poseidon. But even if countermeasures can consistently prevent Poseidon from destroying coastal cities, it still possesses a large destabilizing potential. Detonating Poseidon off America’s coast will at the very least cause mass military and political confusion, providing for a different offensive operation.

Poseidon is, in a way, a victim of its own advertising. If held up against the standard of a revolutionary advancement in nuclear warfare, it likely comes up short vis-à-vis existing strategic weapons. But—assuming that it performs as intended—Poseidon will complement Russia’s nuclear arsenal with a kind of operational flexibility that can translate into real strategic gains.