What We Know: Russia Has a New Drone That Looks Like a B-2 Bomber. 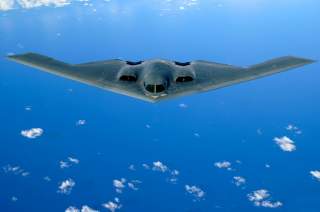 Hunter-B could begin flight-testing any time now, if it hasn’t already done so. “the Russian defense establishment is promising a test that will include a short-duration 'jump'—the UCAV will rise ever so briefly above the tarmac to test its launching and landing capabilities," said Samuel Bendett, an independent expert on the Russian military.

Six Sukhoi Su-57s -- fully half of the stealth fighters that Sukhoi has built since the type first flew in 2010 -- escorted Putin’s Il-96 VIP plane on the trip from Moscow to Astrakhan.

Claiming that Sukhoi had driven down the cost of an Su-57 by 20 percent, Putin announced the Kremlin by 2027 would buy 76 Su-57s instead of just 16, as Moscow previously planned. “I hope that the adjusted plans will be executed,” Putin said in a prepared statement following the Chkalov visit.

It’s worth pointing out that Putin’s announcement of a possible big order for Su-57s also could be premature. But before it can mass-produce Su-57s that the Russian air force actually can use in combat, Sukhoi must complete development of the type’s combat systems, integrate weapons on the planes, expand the assembly line that builds the stealth fighters and train workers actually to make them.

A flying wing similar in shape to the U.S. Air Force's B-2 stealth bomber, Hunter-B, in theory, could penetrate enemy defenses to deliver ordnance.

Hunter-B could begin flight-testing any time now, if it hasn’t already done so. “the Russian defense establishment is promising a test that will include a short-duration 'jump'—the UCAV will rise ever so briefly above the tarmac to test its launching and landing capabilities," said Samuel Bendett, an independent expert on the Russian military.

"At this point, it is going to be heaviest and fastest UAV [in Russian service] if and when fielded, but additional testing and evaluation will have to take place in order for this unmanned system to be fully functional,” Bendett added. “Its speed [up to 620 miles per hour] and weight — up to 20 tons — means that a host of aerodynamic, electronic and high-tech issues need to be worked out."

To be effective in service, Hunter-B also will need small precision-guided munitions, Cooper pointed out. The Kremlin long has lagged behind the rest of the word in PGM development.