What Would a U.S. Attack on Iran Look Like? Think F-35s and B-2 Bombers 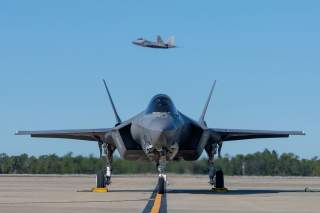 Designed as a Cold War weapon to counter Soviet air defenses, Tomahawks are engineered to fly parallel to the ground on a lower trajectory closer to the terrain below, so as to avoid enemy radar systems. Now, while newer Tomahawks, such as the Maritime Tomahawk able to hit moving targets are now being engineered, they are not yet operational. Given this scenario, maneuverable air-assets might also be used in tandem with Tomahawks to surveil and hit targets such as mobile air defenses.

While specifics regarding any potential strike on Iran are not available for understandable security reasons, the prospect of a measured attack of some kind raises significant questions regarding what assets or platforms might be best suited for a mission such as this -- submarine or ship launched Tomahawk missiles? Or stealth aircraft such as a B-2 or even an F-35?

Widely regarded as a “first to strike” weapon, a Tomahawk missile could bring a number of specific unique advantages. First and foremost, they pose little risk to an attacking given that they have a range of up to 900 miles or more. They are extremely precise and effective against fixed or stationary targets such as command and control centers, fixed enemy missile launchers or anti-aircraft weapons. Using GPS guidance and a two-way data link, current Block IV Tomahawks do have an ability to change course in flight - should new intelligence arrive. They even have a drone-like aerial sensor ability to surveil target areas from the air, adding to levels of accuracy or precision. Tomahawks have been used as a first strike weapons in a high number of engagements in recent years to include Libya, Syria and Iraq - among others. Tomahawks can be fired from Navy cruisers, destroyers and even attack submarines beneath the sea. Finally, while the Navy of course has weapons to counter or destroy Iranian small boat attacks, a longer range, ship or submarine-fired Tomahawk could likely strike Iran while staying out of range of enemy counterattack.

Designed as a Cold War weapon to counter Soviet air defenses, Tomahawks are engineered to fly parallel to the ground on a lower trajectory closer to the terrain below, so as to avoid enemy radar systems. Now, while newer Tomahawks, such as the Maritime Tomahawk able to hit moving targets are now being engineered, they are not yet operational. Given this scenario, maneuverable air-assets might also be used in tandem with Tomahawks to surveil and hit targets such as mobile air defenses.

Now when it comes to air attacks, the Air Force and Pentagon have long referred to stealth bombers and newer “5th” generation aircraft, such as the F-35 and F-22, as being designed for a more high-end “contested” environment wherein the US may not have total air superiority. Therefore, should Iran have mobile air defenses, ground assets or other targets difficult to reach, attacks could likely come from a stealth aircraft. The now operational F-35, which has launched attacks in Afghanistan, could bring new advantages to an aerial assault of some kind. Since Iran may or may not have some advanced or modern air defenses, a stealth aircraft such as an F-35 might be used in tandem with Tomahawk strikes against Iranian air defenses.

It is known that military attacks, or limited strikes of this kind are often first to destroy air defenses and command and control centers. These kinds of strikes, such as those used in 2003 during Operation Iraqi Freedom against Iraq, would be designed to disable an enemy’s ability to counter any kind of air assault. Now, while aircraft such as carrier-based F-18s or land-based Air Force F-15s could be successful in an engagement such as this - any initial air attack on Iran is less likely to use a 4th-gen aircraft -- given that some details regarding the effectiveness and range of Iranian air defenses may not be known. For instance, while a 2015 Russian News Agency (TASS) report confirms the sale of S-300s to Iran, there may be questions regarding just how much they have been sustained and upgraded. Nevertheless, should Iranian air defenses be among the most modern S-300s or S-400s, - which is not known - they could present more of a threat. The most modern air defenses are better networked with digital processing, able to use a wider range of radar frequencies and equipped to hit longer range targets.

A stealthy B-2 bomber, which was used over Afghanistan and Iraq, could not only fly at higher altitudes to hit targets with precision at safer ranges - but could also draw upon its stealth configuration to simply avoid detection all together. A stealthy F-35, in addition, could draw upon its “sensor fusion” technology wherein targeting, sensor data and weapons are all networked for pilots to quickly see an integrated picture of what could be fast-emerging or changing targets. Finally, the F-35s Electro-Optical Targeting System - EOTS -- and its Distributed Aperture System sensors - are longer range than any existing 4th-gen platform. The -F-35 is designed to find and destroy enemy targets - before enemies even know it is there - effectively operating at ranges less detectable to enemy fire. JDAMs, or Joint Direct Aerial Munitions, long-established and extremely precise from the air using GPS, would be a likely choice for air-dropped bombs.

Any type of attack, or series of coordinated strikes, would of course likely hinge upon the quality of intelligence. Should there be high-fidelity drone video footage or satellite images able to identify targets with clarity, it would make a case for Tomahawks or high altitude B-2s.. However, should additional SIGINT or other kinds of intelligence be necessary to follow fast-changing, mobile or more fluid target sets, lower flying drones or 5th-gen assets might bring needed to find and hit emerging targets.