What You Might Not Know About Smith & Wesson Handguns 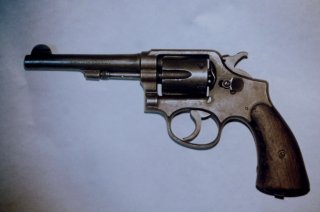 After the first venture failed, Daniel Wesson stayed on at Winchester and worked as plant superintendent for Oliver Winchester. While working at the plant, Wesson developed a small revolver and then with Horace Smith launched a new venture in Springfield, Massachusetts. At the time, the business was run out of a simple ground-level shop at 5 Market Street in Springfield and was the smallest of the four arms manufacturers in the city.

However, the demand for the new revolver and its cartridges launched an empire. The company soon outgrew its twenty-six-man ship and it was forced to move to a far larger facility. Demand for firearms in the United States increased a hundred times over when the country fell into civil war in 1861, and wartime production helped establish Smith & Wesson as one of the leading gun makers in the country, and soon the world.

The company remained at the forefront of cartridge development for decades. Col. Douglas B. Wesson, the grandson of Daniel Wesson, worked in conjunction with Winchester Ammunition, Elmer Keith and Phil Sharpe and together they developed the .357 Magnum cartridge and the Smith & Wesson .357 Magnum revolver. It was at the time, the most powerful handgun cartridge ever produced.

In the earlier 1950s Keith called upon Smith & Wesson to produce a new revolver—one that would rise to fame in the 1970s after Clint Eastwood’s character “Dirty” Harry Callahan described it as “the most powerful handgun on earth.” It was of course the Smith & Wesson Model 29, chambered for the .44 Magnum cartridge. That was later topped by the .500 S&W Magnum, which still holds the title for the most powerful handgun cartridge.

In the early twentieth century, Smith & Wesson took a cue from Colt’s Manufacturing Company and saw how the power of the western mystique could be used to sell guns. Like Colt, Smith & Wesson had been located in “Gun Valley” in New England, but the firearms were an iconic part of the Old West.

Smith & Wesson commissioned several artists, including painter/illustrator/sculptor Fredric Remington, to create advertising artwork featuring the brand’s firearms. In 1902, Remington was commissioned to paint four black-and-white oil paintings depicting scenes of the west. The ads ran in such publications as Collier’s Weekly, Cosmopolitan, Harpers Monthly and Scribner’s—but customers could purchase a 14x15-inch poster of each for 10 cents. While it may have seemed expensive at the time, those original posters from the era can fetch thousands of dollars or more.

While the company moved to an even larger plant in the 1940s, this past September, Smith & Wesson announced plans to move its headquarters to Maryville, Tennessee, citing an unfavorable business environment in Massachusetts. Its presence in Gun Valley may have diminished, but it remains a major player in the American firearms industry.