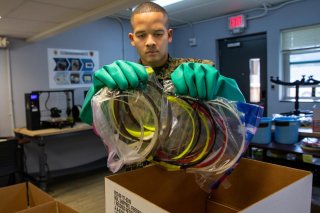 In times of national crisis, the instinct of federal and state governments is to command and control the situation from the uppermost echelons.  Information is consolidated to high-level officials and departments.  Legislation and regulations are passed to preempt all lower institutions and policies.  Executive orders get issued to cast the widest net possible and cover the largest number of people.  The apparent intent is to give the senior state and federal government officials the most direct access to all decision-making and control over execution.

Unfortunately, in a country of over 300 million people that spans over 3.8 million square miles, the ability to effectively command and control nationwide pandemic policy at the federal (or even the state) level is virtually impossible.  For example, Doctor Deborah Birx, the White House Coronavirus Response Coordinator, has stated multiple times that each state and each city will experience its own COVID-19 outbreak and its own bell curve.  Similarly, each state and each local community will have its own corresponding economic fallout.  The aggregate of each city, county, and state public health emergency and economic fallout makes up the national state of emergency.

To manage a national pandemic in a country this size, the federal government must be able to access and process relevant information quickly and make decisions that account for intricate economic, societal, and health dynamics of each unique state and local population.  Relevant information requires three elements: (1) it must be accurate; (2) it must be timely; and (3) it must be applicable to the situation for which it is used.  Despite our best intentions, federal and state governments are not equipped to even access relevant information, much less put it to use effectively.  I would argue that federal and state policies are failing where they only recognize public health over economics and vice versa.  A balance must be struck and the only way we can do that effectively is through a system that facilitates and encourages decision making at the lowest levels to address the unique, community-specific public health and economic issues throughout the country.

The solution may be found through the principles and structure of the command and control doctrine of the United States Marine Corps.

Marine Corps tactics emphasize speed and tempo during maneuver warfare.  Its command and control system are fundamental.  Centralized command recognizes a clear leadership structure and unity of effort.  It places emphasis on a strict chain of command and empowers the senior leader to ultimately direct and supervise the execution of the mission.  However, Marine Corps tactics adopt a "probabilistic" view of combat that understands the complexity and uncertainty of war and inspires a decentralized approach to control.  Decentralized control requires trust in subordinate leaders to accomplish the mission and the commander's intent and enables subordinate leaders to handle issues and take advantage of opportunities at the lowest level to the extent it is consistent with the mission and commander's intent.  The result is a system of command and control that fundamentally emphasizes speed and tempo by enabling decisions at the lowest level.

The commander must define the mission and intent before executing any operation.  It must be succinct and clear.  It must explain why the mission is necessary.  It must reflect the commander's intent, i.e., his purpose, method, and end state.  The ideal method of execution of any mission is when you can strike an equal balance of mission accomplishment and troop welfare.  It is often impossible to achieve that 50/50 split.  The more mission accomplishment is weighted over troop welfare, the more important the "why" of the mission becomes, i.e., the commander must be able to explain the purpose and reason for the mission and why the troops must endure the adversity to achieve it.

Governors do not report to the president.  However, in matters of national security such as this, states are subordinate to the federal government, and the interests of the nation take precedence over those of a state.  Governors must recognize and appreciate this.  Similarly, in matters of state emergency, governors consolidate resources and look to mobilize statewide assets (e.g., National Guard units) to support statewide strategies.  In that sense, the needs of the counties and the cities end up being subordinate.  To implement a functioning command and control structure in a time of public health and economic crisis, leaders must understand their roles and appreciate the hierarchical structure of public interest.  More importantly, leaders at each level of federal, state, and local governments must understand their own capabilities and limitations and leverage and look to take advantage of the former and mitigate the latter.

The pandemic policy command structure functions like this:  The president is the ultimate authority in the sense that he develops and refines the national strategy.  He provides the commander’s intent for the nation—how to combat the pandemic and maintain economic stability—and gives clear guidance as to his purpose, method, and end state for the nation’s response to the crisis.  Governors must work in concert with the president and prepare to execute the national strategy.  In turn, the president must lean on the governors as subject matter experts as to their respective populations and economies and know the issues unique to their communities.  The governors must develop and refine their own state strategies that are consistent with the national strategy and accomplish the end state.  They must lean on the local leaders who are closest to the fight and able to identify specific health and economic issues in their respective communities.

At each level, leaders must be enabled.  The federal government must give clear guidance while maintaining the flexibility to allow governors to make decisions and develop state strategies that address specific issues unique to each state.  State leaders must also maintain clarity and flexibility in their mission statements so local leaders can act on unforeseen situations and exploit opportunities at the community level.

The goal of this structure is to facilitate better execution of a national strategy that harmonizes economic and public health issues.  As mentioned above, the ideal scenario is where we strike a perfect balance between mission accomplishment (functioning economy) and troop welfare (public health)—businesses continue to operate as normal, and we can test and treat COVID-19 patients without impacting the normal battle rhythms of the community.  Clearly, that is not achievable in places like New York, Los Angeles, Seattle, and many other communities across the country.  However, through this command and control structure, we can analyze and ultimately strike a better balance between business continuity and public health.

Armed with a clear mission and intent, state and local leaders can assess the public health and economic issues facing each community.  They are empowered to make decisions and recommendations based on relevant information that is more quickly obtained and efficiently processed at the lowest level.  Leaders can make community-based decisions off relevant information so long as it is consistent with the state and national strategies.  In so doing, we might be able to avoid complete shutdowns of businesses and society.  We can better coordinate and manage the economic fallout.  We can take advantage of states and communities where the pandemic curves have passed or where they may never occur due to existing plans or infrastructure.

Our current policy structure is failing.  There is no “one size fits all” for this pandemic.  The state and federal institutions are strained.  The economic fallout is going to bleed the nation’s coffers dry.  This failure stems from the knee-jerk reaction to control the entire process and the inability to obtain and process relevant information about public health and the economy, which will ultimately be unique across the country.

In order to implement a functioning command and control structure in a time of public health and economic crisis, leaders must understand their roles and appreciate the hierarchical structure of public interest.  More importantly, leaders at each level of federal, state, and local governments must understand their own capabilities and limitations and leverage and look to take advantage of the former and mitigate the latter.