Where Trump and Modi Should Take U.S.-India Space Cooperation 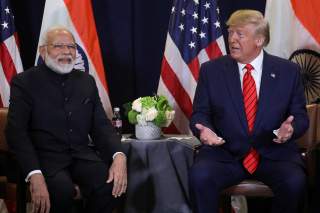 During Indian Prime Minister Narendra Modi’s visit to Houston, Texas for the September 2 forum organized by the U.S-India Security Forum, at which President Donald Trump was present, the issue of U.S-India space cooperation figured prominently. Texas Senator Ted Cruz highlighted the significance of such bilateral collaboration, and House Majority Leader Steny Hoyer made similar statements. Most critically, U.S-India space cooperation was brought up multiple times by President Trump himself, who stated, “Here in America, we are creating the United States Space Force, and we’re working closely with India to enhance space cooperation… We will pioneer new frontiers in space, working together, raising the sights of humanity. We will uphold our values, defend our liberty, and control our destiny.”

But the context in which bilateral space cooperation is taking place has changed. What is the logic pushing U.S. and India closer on space? How exactly should the two nations seek to cooperate on the issue? And how should they work to move forward on civil, commercial, and military space? The answers to these questions will help shape the complexion of the bilateral U.S.-Indian cooperation in what is fast emerging as a vital domain.

The primary logic underpinning U.S-India security cooperation is a shared concern over China. For the first time since the founding of the United Nations, the authoritarian PRC will have an economy that exceeds that of any single democratic economy, including the United States, within the decade. That configuration of economic power threatens the foundation of liberty in the international system unless the world’s two largest economies and democracies—the United States and India—can come together to offer alternate global leadership.

Space is critical in this regard because its vast energy and material wealth vastly exceeds the energy and material resources that exist on Earth, and will be crucial to the future of global power. But if democracies wish to shape that domain, they will need to lead its economic development, to back each other up, and to mutually ensure the stability and openness of space commerce.

Here, India’s posture is promising. Of the spacefaring democracies, India is already among the most capable in launch and anti-satellite technologies. Its economy is expected to grow four-fold in GDP, from $11 trillion in 2020 to $44 trillion by 2050, positioning it among the planet’s top three economies. Given these projections, there are some essential winning bets that the United States and India should place together and on each other to ensure that the future they desire comes about.

First, the United States and India, as “true friends” need a shared vision of industrial space development and security of commerce for the 2050 timeframe. This vision should be explored through a diversity of table-top exercises involving representatives from NASA and the Indian Space Research Organization, the U.S. Space Force and the Indian Space Defense Agency, as well as commercial industry partners from both countries. Such events will lay the groundwork for a consensus on broad global regimes governing economic development of space—frameworks analogous to what the Organization for Economic Development (OECD) and Bretton Woods system did for finance decades ago. At the heart of these efforts must be a shared vision of a future of vast prosperity and freedom.

Second, the United States and India should exchange space personnel at the highest levels of strategy and policy for military space, space intelligence, civil space agencies and commerce agencies. Such exchanges already exist with other key national security partners, but not yet with India. This sort of mechanism will allow easier cooperative planning, and make it easier to harmonize legislation, investments and mutual activities.

Third, building on the success of the U.S.-India nuclear agreement and the ten-year U.S.-India Defense Framework, the two countries should make a series of high-profile investments in the technologies which will form the foundation of the future industrial space economy and cement their mutual connectedness. Some are obvious; Washington and Delhi should be engaging on future space robotic exploration, on future human space flight, and especially on a joint vision of a sustainable lunar base. They should develop a joint vision for Earth observation, environmental surveillance, remote sensing, broadband, and maritime domain awareness across the Indian Ocean Region. Since both countries share similar concerns, their intelligence agencies should be cooperating to use space to better employ electronic, signals and cyber intelligence.

But there are even bigger ideas that should animate the relationship – ideas that are strategic both in their aspiration and effect on global norms and power. These include:

In 2050, the top three economies on planet Earth will be China, India and the United States. Space resources offer vast prosperity and therefore the power to shape global politics. If liberty is to endure, the time is now to place the strategic bets to ensure that democracies remain in a position of strength and solidarity.

Peter Garretson is a Senior Fellow in Defense Studies at the American Foreign Policy Council (AFPC). He was previously the director of Air University’s Space Horizons Task Force, America’s think tank for space, and was deputy director of America’s premier space strategy program, the Schriever Scholars. All views are his own.

Dr. Namrata Goswami is a senior analyst and author. Her work on “Outer Space and Great Powers” was supported by the MINERVA Initiative Grant for Social Science Research. Currently, she is working on a book on “Great Powers and Resource Nationalism in Space” to be published by Lexington Press, an imprint of Rowman and Littlefield. All views expressed here are her own.