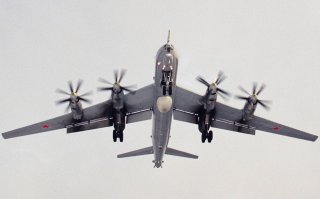 An ADIZ is an area of airspace that extends past a nation’s sovereign airspace but is monitored in the interest of national security. The Alaskan ADIZ extends approximately 200 nautical miles, depending on the range to other international borders.

NORAD is responsible for monitoring the air and maritime approaches to the United States and Canada and executing air defense operations where necessary. For any aircraft entering the Canadian or American ADIZ without authorization, NORAD executes an identification process both to determine whether the aircraft is a threat and to determine an appropriate response.

Moscow’s incursions this month are notable for two reasons. First, the United States may be witnessing an uptick in such incidents. Since 2007, according to NORAD, the United States has identified such incursions and sent fighter aircraft to intercept the Russian aircraft an average of six to seven times per year. NORAD has already conducted four such intercepts of Russian aircraft this year.

Second, these Russian incursions come as the United States struggles with the Coronavirus. The White House has declared a national emergency; members of the Senate and House of Representatives have tested positive for the virus; and the American economy, which underwrites American military strength, is sputtering.

The Department of Defense (DoD) has physically separated its top service chiefs from one another; servicemembers assigned to the Pentagon have tested positive; and deployed troops have fallen ill. Key defense contractors are uncertain of policy changes, and Boeing announced Tuesday it was suspending production across its Puget Sound facilities, where the KC-135 Stratotanker was first produced and where the P-8 surveillance plane and KC-46 tanker are currently produced.

Governors nationwide have mobilized components of their Army and Air National Guard to combat COVID-19, which the U.S. surgeon general warned will worsen in the coming weeks. DoD admitted last week that its capabilities to aid the domestic health care system during the Coronavirus pandemic are limited.

While DoD retains the ability to defend the U.S. homeland and American interests abroad, if this or a future pandemic dramatically intensifies, core U.S. defense capabilities could be compromised. While the United States and other great power militaries are moving quickly toward robotics and autonomous systems, human beings – susceptible to viruses such as COVID-19 – still must perform key defense-related tasks.

Congress should encourage DoD leaders to review pandemic and biological warfare contingency plans to assess how they have been implemented and how they must be improved. Where plans or recommendations were ignored, or key warnings and indications missed, leaders should codify lessons learned and implement systems and exercises going forward to ensure that DoD can maintain readiness and conduct vital operations.

For now, the Trump administration should send a clear message to the Kremlin that the United States can and will defend itself – even in the midst of a pandemic.

Bradley Bowman is senior director of the Center on Military and Political Power (CMPP) at the Foundation for Defense of Democracies (FDD), where Mikhael Smits is a research analyst and Maj. Liane Zivitski is a visiting military analyst. Views expressed or implied in this commentary are solely those of the authors and do not necessarily represent the views of the Air University, the U.S. Air Force, the Defense Department, or any other U.S. government agency. For more analysis from the authors and CMPP, please subscribe HERE. Follow Bradley and Mikhael on Twitter @Brad_L_Bowman and @mikhaelsmits. Follow FDD on Twitter @FDD and @FDD_CMPP. FDD is a Washington, DC-based, nonpartisan research institute focusing on national security and foreign policy.

This article first appeared at the Foundation for Defense of Democracies last year.