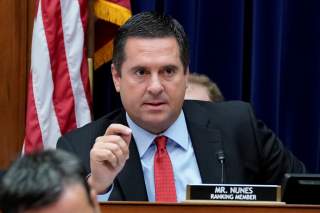 The intelligence community whistleblower who filed a complaint against President Donald Trump is willing to answer questions from Republicans on the House Intelligence Committee in writing, his lawyer said Sunday.

The attorney, Mark Zaid, said he reached out Saturday to GOP California Rep. Devin Nunes, the ranking member of the House Intelligence Committee, to offer to provide written answers under oath to Republicans.

The proposal would allow Republicans to circumvent the intelligence panel’s Democratic majority, led by California Rep. Adam Schiff, who has unilateral power to call witnesses as part of the impeachment inquiry of Trump.

Zaid said that the whistleblower, who is reported to be a CIA analyst, will not respond to questions about his identity.

Recent GOP messaging, led by President Trump (incl this morning), has been to highlight original #WBer & demand disclosure of identity.

Trump and a handful of House Republicans have called for the whistleblower to be identified. Democrats and the whistleblower’s lawyers argue that the identity of the analyst is irrelevant given testimony given by other witnesses in the impeachment inquiry.

The whistleblower accused Trump of abusing his power in his dealings with Ukrainian President Volodymyr Zelensky. The complaint centers on a July 25 phone call in which Trump asked Zelensky to consider investigating whether Ukraine meddled in the 2016 U.S. election and whether Joe Biden pressured Ukraine to shut down an investigation in 2016 into Burisma Holdings, an energy firm that had the former vice president’s son Hunter Biden as a board member.

The whistleblower did not listen to the phone call but relayed what he said were concerns expressed by White House officials regarding the Trump-Zelensky phone call.

Schiff initially wanted to call the whistleblower to testify before Congress, but he backed away from the proposal after it was revealed that an aide in his office had contact with the whistleblower prior to him filing the Trump complaint.

The Schiff aide’s contact with the whistleblower was not revealed until Oct. 3, weeks after Schiff had mounted a pressure campaign to force the release of the complaint.