Who Is Really Causing Climate Change? 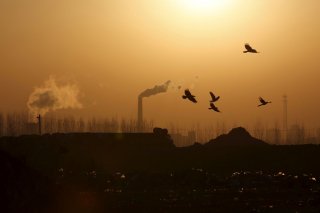 How much climate change is natural? How much is man made?

As someone who has been working on climate change detection and its causes for over 20 years I was both surprised and not surprised that I was asked to write on this topic by The Conversation. For nearly all climate scientists, the case is proven that humans are the overwhelming cause of the long-term changes in the climate that we are observing. And that this case should be closed.

Despite this, climate denialists continue to receive prominence in some media which can lead people into thinking that man-made climate change is still in question. So it’s worth going back over the science to remind ourselves just how much has already been established.

Successive reports by the Intergovernmental Panel on Climate Change – mandated by the United Nations to assess scientific evidence on climate change – have evaluated the causes of climate change. The most recent special report on global warming of 1.5 degrees confirms that the observed changes in global and regional climate over the last 50 or so years are almost entirely due to human influence on the climate system and not due to natural causes.

What is climate change?

First we should perhaps ask what we mean by climate change. The Intergovernmental Panel on Climate Change defines climate change as:

a change in the state of the climate that can be identified by changes in the mean and/or the variability of its properties and that persists for an extended period, typically decades or longer.

The causes of climate change can be any combination of:

What changes have been detected?

The Intergovernmental Panel on Climate Change’s recent report showed that, on average, the global surface air temperature has risen by 1°C since the beginning of significant industrialisation (which roughly started in the 1850s). And it is increasing at ever faster rates, currently 0.2°C per decade, because the concentrations of greenhouse gases in the atmosphere have themselves been increasing ever faster.

The oceans are warming as well. In fact, about 90% of the extra heat trapped in the atmosphere by greenhouse gases is being absorbed by the oceans.

A warmer atmosphere and oceans are causing dramatic changes, including steep decreases in Arctic summer sea ice which is profoundly impacting arctic marine ecosystems, increasing sea level rise which is inundating low lying coastal areas such as Pacific island atolls, and an increasing frequency of many climate extremes such as drought and heavy rain, as well as disasters where climate is an important driver, such as wildfire, flooding and landslides.

Multiple lines of evidence, using different methods, show that human influence is the only plausible explanation for the patterns and magnitude of changes that have been detected.

This human influence is largely due to our activities that release greenhouse gases, such as carbon dioxide and methane, as well sunlight absorbing soot. The main sources of these warming gases and particles are fossil fuel burning, cement production, land cover change (especially deforestation) and agriculture.

Most of us will struggle to pick up slow changes in the climate. We feel climate change largely through how it affects weather from day-to-day, season-to-season and year-to-year.

The weather we experience arises from dynamic processes in the atmosphere, and interactions between the atmosphere, the oceans and the land surface. Human influence on the broader climate system acts on these processes so that the weather today is different in many ways from how it would have been.

One way we can more clearly see climate change is by looking at severe weather events. A branch of climate science, called extreme event or weather attribution, looks at memorable weather events and estimates the extent of human influence on the severity of these events. It uses weather models run with and without measured greenhouse gases to estimate how individual weather events would have been different in a world without climate change.

As of early 2019, nearly 70% of weather events that have been assessed in this way were shown to have had their likelihood and/or magnitude increased by human influence on climate. In a world without global warming, these events would have been less severe. Some 10% of the studies showed a reduction in likelihood, while for the remaining 20% global warming has not had a discernible effect. For example, one study showed that human influence on climate had increased the likelihood of the 2015-2018 drought that afflicted Cape Town in South Africa by a factor of three.

Adapting to a changing climate

Weather extremes underlie many of the hazards that damage society and the natural environment we depend upon. As global warming has progressed, so have the frequency and intensity of these hazards, and the damage they cause.

Minimising the impacts of these hazards, and having mechanisms in place to recover quickly from the impacts, is the aim of climate adaptation, as recently reported by the Global Commission on Adaptation.

As the Commission explains, investing in adaptation makes sense from economic, social and ethical perspectives. And as we know that climate change is caused by humans, society cannot use “lack of evidence” on its cause as an excuse for inaction any more.

This article is part of The Covering Climate Now series
This is a concerted effort among news organisations to put the climate crisis at the forefront of our coverage. This article is published under a Creative Commons license and can be reproduced for free – just hit the “Republish this article” button on the page to copy the full HTML coding. The Conversation also runs Imagine, a newsletter in which academics explore how the world can rise to the challenge of climate change. Sign up here.