Who Is Really Responsible for Afghanistan’s Collapse? 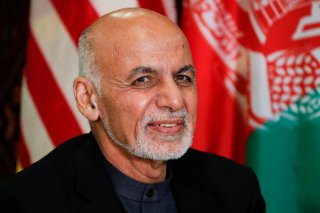 The world woke up on Sunday, August 15 to the unprecedented triumph of the Taliban in Afghanistan. Their victory raises serious questions about who is responsible and who must be held accountable to the Afghan people. But the answer is no a brainer: President Ashraf Ghani. However, explaining why Ghani is responsible is no simple matter.

While in Kabul, Khalilzad was able to meet every influential Afghan leader except the former, and now runaway, president, Ashraf Ghani. Ghani refused to meet Khalilzad, starkly expressing his disinterest in peace as well as his inability to recognize the strength of Washington’s conviction to withdraw U.S. and coalition forces from Afghanistan.

In his desperate pursuit for power, Ghani tried every feeble excuse he could think of to postpone and undermine peace talks. From calling an unnecessary Loya Jirga (grand council) to enlisting more than two hundred delegates to create parallel institutions, Ghani exhausted every avenue to remain in control.

Following immense pressure from senior officials in Washington, Ghani formed a team of negotiators. However, the Afghans and their international partners expected that Ghani would assign a small yet influential team of negotiators and give them enough power to effectively negotiate on behalf of the republic. In contrast to that anticipation, Ghani chose to send a large number of representatives to Doha. The Afghan negotiators, while diverse, had little or no leverage to engage the Taliban in meaningful peace talks.

In the meantime, Ghani and his team in Arg, Afghanistan’s presidential palace, worked deliberately to discredit Khalilzad and suppress pro-peace activists in Kabul. Moreover, Ghani and his associates attempted to lobby Washington to remove Khalilzad from his post and convince U.S. officials to maintain its military presence indefinitely in Afghanistan.

Before fleeing the country, Ghani had shown no signs to engage in serious negotiation with the Taliban. In one of his conversations in the Arg, Ghani had mocked the delegation by comparing it to a kite whose string he masterfully controlled and maneuvered from Kabul.

Afghan commentators who were criticizing Ghani’s fallacious intentions were effectively marginalized and even intimidated by his gang of security personnel.

Meanwhile, the Taliban, which felt emboldened after dragging the mighty United States to the negotiating table, had already realized that Ghani was not sincere about peace and decided the only way to accomplish its objective, which is to establish an Islamic government in Afghanistan, was to resort to force. The Taliban then began to seize hundreds of districts.

After Ghani’s final refusal to a proposal offered by the Taliban for a peaceful settlement that required him to resign from office and allow for a transitional government, the Taliban moved quickly to capture large cities across Afghanistan. Within two weeks, the Taliban changed Afghanistan’s map from being mostly government-run provincial capitals to bringing the whole country under Taliban control, including the capital city, Kabul.

Yet before the Taliban entered Kabul on Sunday evening August 15, 2021, Ghani had successfully escaped with his wife and close aides to an unknown country.

Today, Ghani is on the run and his whereabouts remain unknown. He has abandoned the Afghan people and destroyed their hopes for freedom. What is known is that Ghani and his wife left with loads of money. Some bags of cash were so heavy that they couldn’t carry them and were left behind, according to Nikita Ishchenko, spokesman for the Russian Embassy in Kabul.

Ghani is already being slammed by Afghans from different walks of life for misleading the nation about the peace process and pursuing divisive politics.

Afghanistan’s history has been harsh on leaders who have abandoned the Afghan people and escaped with their lives. Ghani will be judged bitterly, especially about a promise he made in one of his recent speeches.

While speaking with local governors on August 4, Ghani distinguished himself from King Amanullah Khan who had fled office in the face of an uprising during the early twentieth century by saying, “I did not like that Amanullah Khan run away, but I will never run away.”

Sami Jabarkhail is a Ph.D. Candidate in Human Resource Development at Texas A&M University and a delegate to the 2014 NATO Future Leaders Summit in Wales, United Kingdom. Follow him on twitter @SamiJabarkhail