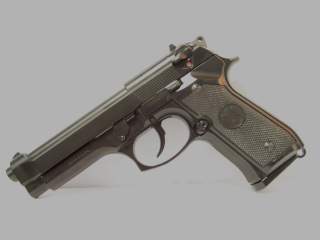 It’s an inescapable reality that in big institutions, people will sometimes overlook memos and misplace equipment.

But that’s cold comfort to the U.S. Army, which is struggling to select a new handgun while also dealing with the fallout from its last, controversial pistol choice.

In August 2015, the ground combat branch inspected its Beretta M-9 pistols to make sure the guns had key safety fixes. The Army was supposed to have finished upgrading all the guns … more than two decades ago.

“During a training exercise, a soldier was injured when a slide failure resulted in the rear portion of the slide separating from the receiver and struck him in the face,” an official warning explained.

“‘WARNING’: DEATH OR SERIOUS INJURY TO SOLDIERS, OR DAMAGE TO ARMY EQUIPMENT WILL OCCUR IF THE INSTRUCTIONS IN THIS MESSAGE ARE NOT FOLLOWED.”

War Is Boring obtained the startling message via the Freedom of Information Act. Censors inked out the number of guns the Army believed were missing the updates, including a number of weapons in “SWA.”

This is a common Pentagon acronym for the Southwest Asia region, which includes Iraq. The warning applied to all M-9s in the inventory of the Army, its sister branches and Special Operations Command.

The redacted portion of the document suggests the total could be as high as six figures. Since Beretta delivered around 160,000 pistols to the military before adding the modifications at the factory, the Army may simply have ordered troops to check every one of the old weapons still in service.

Issues with the Beretta’s slide are hardly new. The broken parts were a key part of the controversy surrounding the Army’s first decision to buy the Italian-made guns more than three decades ago.

Between 1985 and 1988, the Army and Navy documented no fewer than 14 incidents where the slide failed. In four cases, the shooter suffered an injury.

“What is of particular concern is the safety hazard encountered when failure does occur,” the Government Accountability Office explained in a 1988 report. “Injuries resulting from four slide failures included face lacerations requiring stitches, a broken tooth and a chest bruise.”

The GAO had already forced the Army to hold a new competition after complaints of collusion in the original testing. Ultimately, the Beretta won out again and became the standard handgun across the U.S. armed forces.

With the winner settled for good, the Army issued an order to modify all the existing pistols with a set of safety features. The modification kit included a new slide, a reinforced hammer pin and and a left grip panel.

The Army reportedly concluded that brittle metal in the original slides was the source of the gun’s failures. However, Beretta and its allies implied that the military’s overly-powerful ammunition was actually at the root of the problems.

Whatever the cause, in March 1989 troops began installing the new parts on around 160,000 potentially defective pistols. On June 30, 1993, the Army declared that all the guns complied with the so-called “modification work order,” or MWO.

Or so it apparently thought.

“Recently, a soldier found out the hard way that the MWO hadn’t been applied to all M-9s when a slide broke and hit him in the face,” was how the Army’s P.S. Magazine described the matter on Facebook on Oct. 28, 2015. “ All armorers need to immediately check their M-9s.”

Billed as “the preventive maintenance monthly,” the magazine in question publishes notices and tips on defects, recalls, common problems and other issues for troops. In continuous publication since June 1951, each issue features comic book-style art to help these important message stick.

“Are you kidding me?!” an anthropomorphized pistol asks the shooter in a version of the message in the January 2016 edition. “That MWO was supposed to be done 20 years ago!”

The issue is so old that the order isn’t even available online — and the Army doesn’t have any modification kits on hand. Anyone who finds a problematic gun is supposed to send it back by registered mail to the Defense Logistics Agency. We don’t know what will happen to the guns after they go back to the warehouse.

All of this comes at at time when the Army finds itself embroiled in another controversial attempt to buy new pistols. Eight years ago, the services canceled their previous handgun projects.

Around the same time the slide flew off the old Beretta, the ground combat branch asked pistol-makers to offer up new options. If this program goes according to plan, troops should start getting their new weapons sometime around 2018.

Under the proposal, the Army will buy no fewer than 280,000 guns for itself. Other services would have the option of signing up to get their hands on another 212,000 pistols.

With the previous experience of the Beretta decision, the Army itselfquestioned how realistic this timeline might be when it explained the need to buy Glock pistols now for commandos and allied troops in 2015. The contract document pointed out that the service had already spent two years trying to get its latest project off the ground.

“We’re not figuring out the next lunar landing. This is a pistol,” the Army’s chief of staff Gen. Mark Milley told a gathering at New America’s Future of War Conference on March 10. “Two years to test? At $17 million?”

“You give me $17 million on a credit card, and I’ll call Cabela’s tonight, and I’ll outfit every soldier, sailor, airman and Marine with a pistol for $17 million,” the Army’s top officer added, referring to the Nebraska-based outdoor goods chain, which sells firearms.

But Milley’s obvious frustration notwithstanding, the Army knows full well how complicated the project might turn out to be due to budgets, politics, competing priorities and the sheer size of the American military. Replacing hundreds of thousands of pistols is no easy task.

In February 2015, the Army also formally rejected Beretta’s offer to update the existing pistols. The Italian company’s American branch subsequently decided to sell these M9A3 guns on the commercial market.

It took seven years for the Army to settle on the M-9, more than a decade for everyone to get them and about as long to get important fixes installed — and people are still getting hit in the face by faulty slides.