Whoops: A Russian MiG-31 Shot down One of Its Buddies 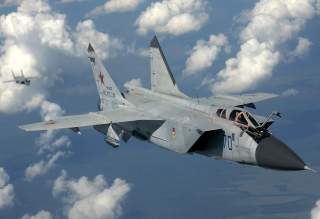 In short, the MiG-31 mistakenly shot down its wingman.

It has now emerged that the twin-engine fighter was brought down by another MiG-31 which fired an R-33 air-to-air missile mistakenly.

A report appeared on Baza claims that “… the accident of the MiG-31 aircraft was the result of omissions in the activities of officials in the organization of the LUT (flight tactical exercises – Approx. Ed. precluding their mutual falling into the zone of permitted launches of guided missiles R-33)…”

The report continues: “… the accident of the MiG-31 aircraft as a result of the crew’s violation of safety measures and missions for flight, expressed in the premature activation of the aircraft’s on-board radar station by the navigator and the unauthorized launch of the R-33 guided missiles by the commander of the MiG-31 fighter aircraft…”

In short, the MiG-31 mistakenly shot down its wingman.

The MiG-31 (NATO reporting name: Foxhound) was developed during 1970s by the Mikoyan design bureau as supersonic interceptor aircraft and was aimed to replace the earlier MiG-25 “Foxbat.” In fact the MiG-31 is based on, and shares design elements with the MiG-25.

The MiG-31 has the distinction of being one of the fastest combat jets in the world and continues to be operated by the Russian Air and Space Force (RuASF).

Thanks to its astonishing flight characteristics the Foxhound was able to intercept and (according to MiG-31 pilots) potentially shoot down the legendary SR-71 Blackbird.

To undertake this mission the MiG-31 relied on the Vympel R-33 (NATO reporting name: AA-9 Amos), an air-to-air long range missile capable to shoot down fast targets like the SR-71 Blackbird.