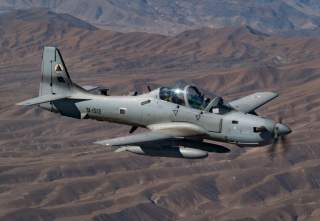 In fact the A-29s were a “game changer” in the 2016 fighting season and there are high expectations for the aircraft and crews in 2017.

On Mar. 20, 2017 four A-29 Super Tucano light-attack aircraft arrived for duty at Kabul Air Wing, Kabul, Afghanistan, where they Afghan Air Force (AAF) will use them for close-air attack, air interdiction, escort and armed reconnaissance.

As told by Capt. Jason Smith, 438th Air Expeditionary Wing Public Affairs, in the article A-29s arrive at Kabul in time for fighting season, the arrival of the aircraft, which traveled from Moody Air Force Base (AFB), Ga., bring the AAF A-29 inventory from eight to 12 aircraft in country.

Currently seven more A-29s are assigned to Moody AFB where they are used for training pilots.

“The four additional aircraft will allow us to increase the number of missions we are able to support nationwide,” pointed out an Afghan A-29 pilot who can’t be identified for security reasons. “More targets can be attacked—more ground troops can be supported.”

As he explains, sometimes a nation needs their military to pressure the enemy in order to develop peace and stability.

“The AAF plays a major role in this,” he said. “We are helping the peace process. When an A-29 is overhead, it gives motivation to the ground troops, and the enemy realizes they can be struck anywhere and will feel the pressure to come to the peace table. This is how we will bring peace and stability to Afghanistan.”

In fact the A-29s were a “game changer” in the 2016 fighting season and there are high expectations for the aircraft and crews in 2017.

“The AAF pilots are continually gaining proficiency in the A-29,” said Brig. Gen. David Hicks, Train, Advise, Assist Command-Air (TAAC-Air) and 438th Air Expeditionary Wing commander. “They are capable of providing air attack anywhere in the country. In the past, the Afghan National Army relied on the Coalition for air support. Now, it’s their own countrymen overhead flying the missions.”

Hicks said the additional A-29s give the AAF more options to forward deploy airpower throughout the country.

The newest A-29s will undergo a brief reconfiguration after which they will be ready for combat operations in the 2017 fighting season.

In 2011 the Embraer A-29 Super Tucano was declared the winner of the US Light Air Support (LAS) contract competition over the Hawker Beechcraft AT-6B Texan II. The contract was canceled in 2012 citing concerns with the procurement process, but re-won in 2013. Twenty of these light attack aircraft were purchased for the Afghan Air Force.

The first four aircraft arrived in Afghanistan in Jan. 2016.

This article by Gabriele Barison originally appeared on The Aviation Geek Club in 2017.