Why Africa Needs the World to Keep the Rise of Global Temperatures at 1.5°C 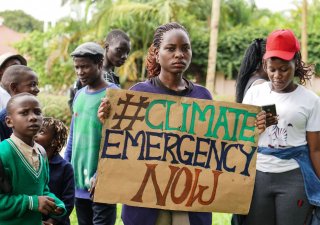 If the world doesn’t make a bigger effort to cut emissions than it does now, global warming might have a severe effect on sub-tropical Africa.

Our research has found that for Africa, it would make an important difference to limit a rise in global temperature to 1.5°C. That limit would shrink the likelihood of extreme climate events like heatwaves. And that would be good for societies and economies.

A global mean temperature of 2℃ above pre-industrial levels has been under discussion for years as a threshold for danger. Many countries already experiencing extreme climate events have raised concerns, though, that a 2℃ target is insufficient to shield them from these extremes.

These countries welcomed the 2015 Paris Agreement on efforts to confine global warming and reduce risks of climate change in the future.

Africa is a climate change hotspot. But there has been little research on how much difference a lower temperature target would make.

To fill this gap, we explored potential benefits for Africa from limiting global warming to 1.5°C compared to 2℃. We used a model that enabled us to simulate how heat and hydrological extremes might change in Africa under stabilised 1.5°C and 2°C scenarios. We focused on the likelihood of seeing a repeat of record-breaking seasons that have already happened.

We found that keeping global warming to 1.5°C could significantly decrease the frequency of extreme climate events across the continent. In particular, the probability of events like the southern African hot December–February 1991/1992 and the heatwave in North Africa in December–February 2009/2010 would be a lot lower.

Over the past decade, Africa has recorded severe high temperatures.

We established that if global warming were to be limited to 1.5℃ instead of 2℃, the chances of extreme heat events in Africa might be reduced. Specifically, the likelihood of annual high temperatures that exceed the 2015 record is estimated to be 100% under 2℃ level, but 91% under 1.5℃ levels.

Under a 2℃ scenario, we projected that there is a 30% chance of occurrence for extreme high temperatures similar to that of 2009/2010 in North Africa. But if temperatures were kept at a projected 1.5℃, there would be only an 11% chance of such an extreme occurring.

In February 2000, there was a tropical cyclone that brought unusually high rainfall to southeast Africa and as far west as Namibia. It was also a year when Namibia experienced its wettest summer since 1976. It resulted in devastating floods and loss of life.

Global climate model simulations in our study estimated that similar extreme events in this region will be rare under low global warming scenarios in the future, with slight difference in occurrence between 1.5℃ and 2℃ warming levels. But in general, global climate models have been known to draw differing results in terms of the direction of future precipitation. That’s why our confidence levels are higher for temperature projections than precipitation projections.

Almost all subsistence farmers in Africa who practise rain-fed agriculture are affected by natural climate variability. Increased frequency and severity of droughts is projected in the 21st century over most of the continent because of climate change.

Using rainfall deficits and high temperatures as drought indicators, we explored the likelihood of droughts similar to the 1991/1992 one in southern Africa under low warming scenarios. We found that, even though the rainfall would be similar in both the scenarios, the high temperatures might increase the probability of such droughts.

Benefits of a low-warming world

Our study projects that limiting global warming to 1.5℃ instead of 2℃ would have considerable paybacks for Africa. In particular, extreme heat events like the ones in 2015 and 2009/2010 might be reduced by 10% and 20% respectively under 1.5℃ of global warming level compared to under 2℃ level.

Temperatures as high as those in the December–February 1991/1992 southern African drought are estimated to be 25% less likely under 1.5℃ of global warming level compared to under 2℃ level.

So, continued efforts to limit warming to 1.5°C may offer considerable benefits to Africa in terms of reduced occurrence of heat extremes.